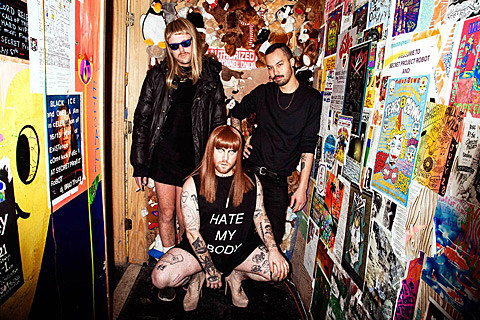 NYC trio Bottoms describe themselves as "two shitty drag queens, a 303 and a drummer" and a "gender-problematizing goth dance band." Simon Leahy and Michael Prommasi were both in Teeth, and they're rounded out by "lead screamer" Jake Dibeler. Musically, Bottoms draw inspiration from acid house, electroclash/dancepunk and other underground dance scenes; lyrically they mix camp with some serious themes. They released "hiv" for World AIDS Day and they talked to FADER about their song "My Body":

Musically, it's was inspired by Terry Riley and the Paradise Garage sound. We're really interested in the dichotomy of upbeat music with a more depressing lyrical theme. It's like sad music for the club -- people dancing to a suicide note. Of course with most of bottoms music, there is always a sense of humor. In this way, the music becomes a fair representation of the three of us as people: simultaneously sad and funny, and complex.

Bottoms' debut EP, Goodbye, was released this week via JD Samson's Atlas Chair label. You can stream a few tracks from it below.

Tonight (1/23) at Secret Project Robot, Bottoms play a record release show with JD Samson and Ryan Smith as your DJs. You can buy advance tickets that also gets you a copy of the vinyl at the show. They've got a few European shows coming up, in April. All dates are listed below.