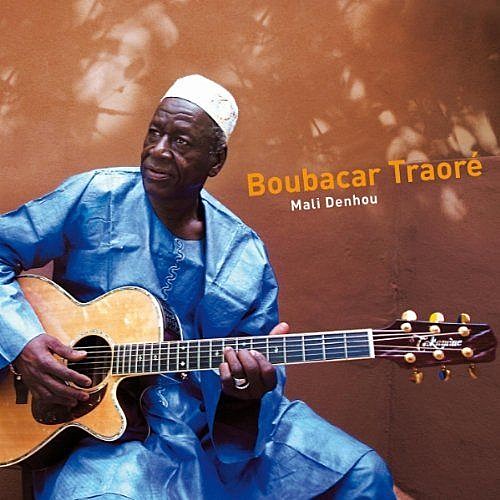 Boubacar Traoré took his guitar and strode out into the fields outside of Bamako, Mali. There, in the country quiet, he wrote a dozen new songs in a month.

"Town is too noisy. And I didn't go to the bush, but I left my guitar here, on my farm. Because I know here, I'm on a leash," says Traoré.

That leash, that connection to land and family, resulted in Mali Denhou (Lusafrica; June 14, 2011; distributed by Harmonia Mundi). On Traoré's first studio album in six years, the kindly, gritty voice of the veteran Malian bluesman intertwines with wonderfully idiosyncratic, cascading guitar. Wistful and pensive, Traoré exhorts, gives thanks, and reflects on love, history, and duty, with a deceptive simplicity and a deep, subtle knowledge of Mandingo tradition and West African vintage pop.

A legend in Mali since his groundbreaking hits of the 1960s, Traoré, possibly the eldest internationally-touring guitarist from Mali, has been around. He knows exactly what he wants. He insisted that if he was going to do a studio album, he had to have his longtime friend, the nimble French harmonica player Vincent Bucher, play with him. Bucher's rich, pure tone moves in and out of Traoré's succinct phrases and unexpected rhythms effortlessly on tracks like "Mondeou."
[Africa Review]

Malian blues singer/songwriter/guitarist Boubacar Traore is set to release his first studio album in six years, Mali Denhou, June 14 via Lusafrica. He comes to America for a short tour in the fall that starts at the Chicago World Music Festival and ends at the Montreal International Jazz Festival. In between he plays a Brooklyn show at The Bell House on September 27. Tickets are on sale now. All dates and some videos below...