Bouncing Souls @ The Stone Pony in 2009 (more by Bryan Bruchman) 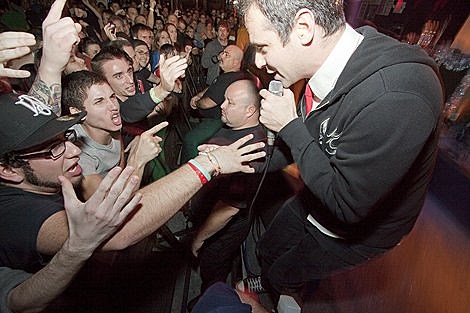 Tickets for Bouncing Souls' previously mentioned Rocks Off boat show, set for September 13th, are finally going on sale. Get those Friday at 10am.

The night before that gig, the Souls have a Brooklyn show at Music Hall of Williamsburg (along with Defiance, Ohio, The Great Explainer). Tickets are on AmEx presale now. General sale starts Friday at noon.

Ready for CMJ? Me First and the Gimme Gimmes are. The punk rock supergroup (Spike Slawson, Joey Cape, Chris Shiflett, Fat Mike, Dave Raunwith) play a Fat Wreck Chords CMJ showcase at Music Hall of Williamsburg on October 23rd. Also on the lineup are None More Black, Teenage Bottlerocket, Smoke or Fire, Dead To Me, The Flatliners and Cobra Skulls. Tickets are still on sale. Me First play another CMJ show, this time on a boat, on Friday, October 22nd (also with Teenage Bottlerocket and Cobra Skulls). Tickets are on sale for that too. They also play Asbury Lanes is Asbury Park, NJ, on October 24th (tickets).

"Led by the husband and wife duo of Tannis "Miss TK" Kristjanson on vocals, and Ari Katz aka "Mighty Lion" on drums, the six member gang of Miss TK & The Revenge have been dropping scattered bits of their punk disco dance hits since their 2004 debut XOXO on the legendary NJ punk label Gern Blandsten. Formed in the wake of the short lived Zero Zero (Katz has also spent the last 20 or so years as the singer for influential NJ punks Lifetime), Miss TK & The Revenge have been deep in the studio producing new tracks for the past few years, resulting in the dynamic new LP The Ocean Likes To Party Too."

Miss TK's new record, The Ocean Likes To Party Too, came out on July 13 on Ernest Jenning Records. It should also be noted that Lemonade's only other upcoming NYC show is August 6th at a venue called the Cove (formerly Hugs) on North 6th Street.

A flyer, Miss TK video, and Bouncing Souls tour dates are below.

Miss TK & The Revenge: NO BITERZ! from Mr. Record on Vimeo. 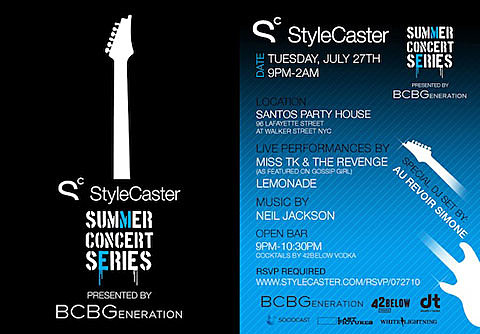