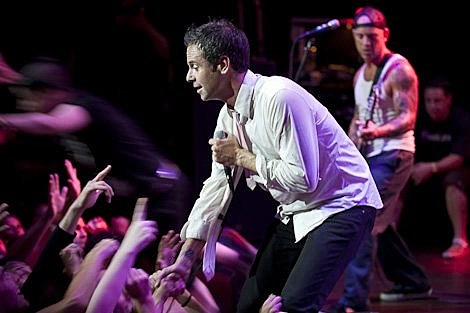 We're well on our way to making HOME FOR THE HOLIDAYS the Jersey Shore's rockinest holiday tradition! This is our third year which marks the distinction between 'maybe we can pull this off' and 'a lifetime commitment'. We're happy to assemble a wild cast of our friends and comrades to entertain you and wish you well for the coming year. What's better than getting together with a couple hundred of your closest friends for the holidays and toasting each others' health? [The Bouncing Souls via press release]

The Bouncing Souls will play a four night residency at The Stone Pony in Asbury Park, NJ from Dec 26 - 30th as part of their 3rd annual Home For The Holidays series of shows. Each night features a different set of bands with:

Chuck Ragan was just in town over the weekend, bringing his Revival Tour to Gramercy Theatre on Saturday night.

Blacklisted are scheduled to play the Deathwish day party at Santos during CMJ.

The Bouncing Souls are currently on tour with Bayside and Broadway Calls, a tour which ends in early November. Full tour dates are below...