Bowerbirds at Bowery Ballroom in 2010 (more by Laura Leebove) 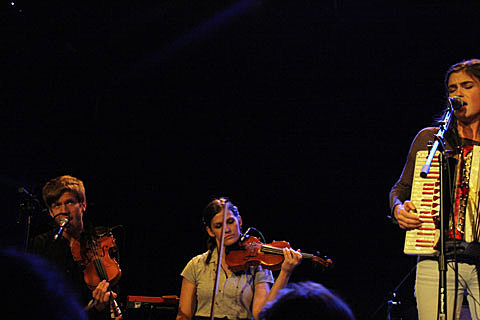 Bowerbirds are currently on a tour that brings them to NYC this week for a Bowery Ballroom show on Friday (3/23) with Dry The River and Mandolin Orange. That show is sold out, but if you weren't able to get tickets, you'll have another chance to catch them in NYC later this year when they play Music Hall of Williamsburg on June 23. Tickets for the Brooklyn show go on sale Friday (3/23) at noon.

The MHOW show is currently a one-off happening two months after their current tour ends, and over a month before they hit Pickathon 2012 at Pendarvis Farm, OR. The three-day fest will also include sets by Neko Case, Dr. Dog, Heartless Bastards, Handsome Furs, AA Bondy and many more.

Speaking of Dr. Dog, they're in NYC this week too and we're giving away tickets on Facebook.

Bowerbirds released their new album, The Clearing, earlier this month. Spotify users can stream it here. The video for album single, "Tuck the Darkness In," is below.

Updated dates and video below...