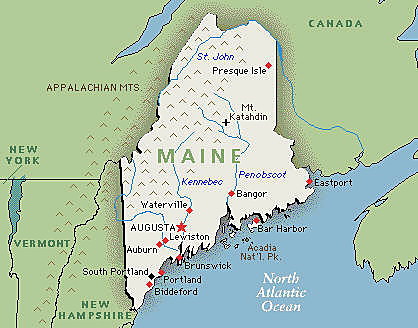 NYC promotion company Bowery Presents already has a presence in NJ, upstate NY, and as of recently, Boston. Today they've announced that they'll also be operating in Portland, Maine. Press release below...

(New York, NY) May 26, 2010...The Bowery Presents, an independent promotion company based in New York City, and Alex Crothers of Higher Ground Presents, an independent promoter and a fixture in the New England music scene, have announced today that they have signed a deal with Stone Coast Properties to reopen the State Theatre in Portland, Maine. Music industry veteran and Portland local Lauren Wayne will serve as General Manager of the State Theatre and will lead the charge in booking the venue, with the first shows slated to begin this fall. The historic theatre has been closed since 2006, and the new partnership between The Bowery Presents and Alex Crothers will continue the upgrades to the historic theatre started by the owners.

The Bowery Presents and Mr. Crothers will be equal partners in operating and programming all music events at the State Theatre, with Lauren Wayne reporting to both parties. The group expects to book approximately 80 shows a year with a cross section of live music from diverse performers. In addition to the State Theatre, the partnership will explore options to book other venues and festivals in the area and develop marketing and partnerships opportunities for their concerts.

"Until Alex brought us this opportunity, we hadn't envisioned expanding into Maine," said Jim Glancy, The Bowery Presents. "But once we visited Portland and toured the State Theatre, we fell in love with the City and saw the potential in the theatre that will appeal to Portland's creative community. Bringing Lauren on board provided us with a great asset in the Portland and was the icing on the cake."

In addition to booking performances at the State Theatre, Ms. Wayne will oversee all operations of the theatre including production management, box office and ticketing, concessions and other sales. Her office will be on site at the venue.

"I am excited and honored to be involved with the renovation efforts and overall management of the State Theatre," said Ms. Wayne. "With further refurbishing, the State will once again serve as an amazing, beautiful showcase for bands - and it will be exciting to have local audiences as well as audiences from all over New England enjoy this historic venue. The renovated State will be a great addition to Portland's thriving creative economy."

Ms. Wayne will also oversee renovations and continue on the progress that Stone Coast Properties began on the State Theatre. Recent renovations include electrical work, relocating the men's and women's rooms and ceiling refurbishments, ensuring the historic venue is code compliant. The new partnership plans to restore the stage and modernize the venue with new sound systems, including work to the theatre's acoustics, and updating the lighting. The entire theatre will also be reseated, creating new site lines, giving the audiences better views of the performers. The new venue capacity is expected to be 1,450. In addition, there will be upgrades to the dressing rooms, new administrative offices, refurbishment of the bars, and new carpet installed.

"I am thrilled to have a hand in reviving the State Theatre, a jewel in the Portland-area music scene and a legacy in New England," said Mr. Crothers. "Reopening the theatre provided the perfect opportunity to work with Jim and John at Bowery Presents. We've flirted for years and now we have our first date. Our companies share the same philosophy for restoring the State Theatre and bringing quality entertainment to the area."

The State Theatre opened on November 8, 1929 and was designed in a semi-Atmospheric/Spanish style with an original seating capacity of 2,300. It operated as a first run movie house until the late-1960, when it became a porn theatre. In 1989, the theatre was closed and fell into disrepair. By the mid-1990's, the theatre was saved and restored. It closed for a brief time after its restoration and was reopened by new owners as a performing arts and concert venue. The State Theatre hosted such diverse acts as Wilco, Modest Mouse, Gillian Welch, David Byrne, Interpol, Snoop Dogg, Ray LaMontagne, Sonic Youth, John Hiatt and Kings of Leon before it closed in early-2006.

"I am excited to have signed a long term agreement with Bowery Presents and Alex Crothers," said Ron Goglia, Stone Coast Properties. "With Bowery Presents' expertise opening theatres, Alex's knowledge and love of Portland, and their combined reputation in the music world, we knew this team would be the ideal tenants to bring the State Theatre back to life."

The State Theatre is located at 609 Congress Street in the heart of the Portland Arts District. For more information on the State Theatre, updates on its renovation and concert announcements, please go to www.statetheatreportland.com.

About The Bowery Presents:
The Bowery Presents is an independent promotion company based in New York City. With a core business based around great music, its mission is to bring the best bands to the best venues and to provide a great concert experience for fans and artists, along with reasonable ticket prices. Over the years, Bowery Presents has worked with a vast cross-section of some of the most talented performing artists, including established names such as Willie Nelson, Aretha Franklin, John Prine, Ringo Starr and Joe Jackson and new artists like LCD Soundsystem, Kings of Leon, Muse, My Morning Jacket, The White Stripes/Raconteurs/Dead Weather, Band of Horses, John Mayer, Modest Mouse, Silversun Pickups, The National, The Flaming Lips, Guster, Bright Eyes, MIA, Passion Pit, and Deadmau5. The company's activities center on programming live music in the venues that it owns and operates including several New York and New Jersey music venues, such as Terminal 5, The Bowery Ballroom, Mercury Lounge, Music Hall of Williamsburg, and the Wellmont Theatre in Montclair, NJ. The Bowery Presents also presents shows at other venues in New York City such as Madison Square Garden, Radio City Music Hall, and the Beacon Theater, and across the Northeast such as the Constellation Brands-Marvin Sands Performing Art Center located on the campus of Finger Lakes Community College in upstate New York. The company recently launched The Bowery Presents: Boston, an extension of the company with an office headquartered in Boston at the Royale. Michael Swier and John Moore of The Bowery Presents have presented music at the Mercury Lounge, the Bowery Ballroom and Webster Hall over the past 15 years. Jim Glancy, former president of the New York division of Live Nation, joined the company as partner in 2006. For further information go to www.bowerypresents.com

About Alex Crothers:
Alex Crothers is the co-owner of Higher Ground based in So. Burlington, Vermont - an independent concert promotion company and separate music venue that produces more than 420 events a year in the region. Mr. Crothers opened the venue in 1998 and has produced over 4,000 events in that time, recently steering it through a successful relocation. Over the years, Higher Ground has been able to identify and attract both rising stars as well as legends -- including John Mayer, Norah Jones, Jack Johnson, David Gray, Sean Paul, Taj Mahal, Dr. John, Godsmack, Jurassic 5, Kings of Leon, My Morning Jacket, MGMT, Black Eyed Peas, KT Tunstall, Black Crowes and Mos Def. Mr. Crothers also developed several successful outdoor concerts series and actively promotes concerts throughout New England the New York tri-state area by such artists as Bob Dylan, Wilco, Spearhead, Grace Potter, Crosby Stills & Nash, Willie Nelson, and Alison Krauss. Crothers co-produced the first two years of OSHEAGA music & arts festival in Montreal, which features 75+ bands over 4 stages and is staging a large festival in North Adams, MA with Wilco in August of this year. www.highergroundmusic.com