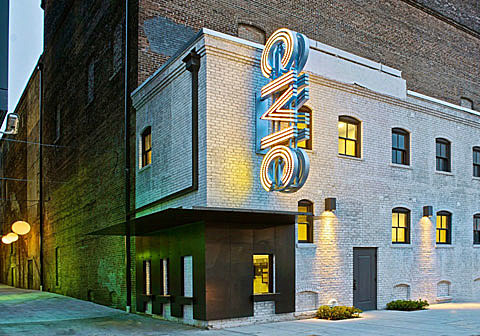 NYC concert propmoters Bowery Presents, though no longer at the old Wellmont Theater in NJ, have been expanding and moving South. This week they've officially confirmed the rumor that they're re-opening a historic theater in New Orleans called the Civic Theatre. The initial lineup already includes Passion Pit, The Black Crowes, BRMC, John Waters and more. Check out the full press release and initial schedule below...

New Orleans, La.--July 15, 2013--Honoring the Past. Creating the Future. Reveling in the Present. With the relaunch of the historic Civic Theatre in January after a nine-month renovation, New Orleans' oldest theatre has come alive making its official debut with the announcement of an all-star fall lineup. The Civic has partnered with one of the US's best live music promoters in the business, The Bowery Presents, to bring the best established and emergent artists to those who wish to enter the country's first modern historic theatre.

"The Civic is designed to create the optimal experience for both the artist and patron," says Bryan Bailey, a partner in the Civic Theatre. "It's the harmony of humans and technology that brings the space to life. That's how we approached every decision we've made in designing the audio/visual and infrastructure solutions that have been implemented at the Civic. The oldest theatre in the city is married with the most advanced integrated tech infrastructure for a venue of its size anywhere in the country. It's something that makes the Civic a unique and intimate experience." A selection of shows in the Civic Theatre's fall lineup includes:

Tickets for the complete fall 2013 Civic Theatre lineup will go on sale to the public Friday, July 19th on the venue's website at http://www.civicnola.com. Tickets will also be available on The Bowery Presents South web site at www.BowerySouth.com.

"We couldn't be more excited to help curate this live music experience at the oldest theatre in New Orleans, the birthplace of jazz and one of the most important cities for music and musicians in the world," says Jim Glancy, Partner, The Bowery Presents. "The Civic Theatre is a dream for musicians and music fans alike."

The Civic Theatre's new beginning celebrates the juxtaposition between historical architecture and technological innovation, allowing the theatre to create a premiere audience experience and meet the creative goals of today's best artists:

- Equipped with a cutting-edge, adaptable modular flooring system, the Civic is able to transform from theatre-style seating, to modern concert format, to corporate conference arrangement in minutes.

- The venue is outfitted with an integrated ETC Paradigm Control System, the top-of-the-line audio/visual control solution, enabling any production to come to life seamlessly.

"We designed the Civic Theatre to merge its historic aesthetic with cutting-edge technology to create an experience that is a class above any other performance venue in the South," said Gary Solomon, Jr., president of Solomon Group, one of the Civic Theatre's partners. "The state's Live Performance Infrastructure tax credits helped us renovate and bring the Civic Theatre back to life and now through
the program's production tax incentives, we are able to attract a first rate company to partner with us to provide world class entertainment. This is exactly how the tax incentives are supposed to work, and we are delighted that we have been able to utilize the program and optimize its benefits".

The Civic has also teamed up with renowned mixologists, Neal Bodenheimer and Kirk Estoppinal, of Cure and Bellocq, to develop the Civic Signature Cocktail menu. These drinks are created from American- made, small-batch spirits, using craft cocktail techniques with spirits from organic and artisan producers.
Three bars located throughout the venue are designed for delivering speed and efficiency while maintaining the most superior level of quality.

Built in 1906 by Sam Stone, the Civic Theatre is New Orleans' oldest theatre--revitalized with an eye to the future to now become the city's newest multipurpose venue, a premier showcase of innovation in New Orleans, and America's next technology hotbed.

"Many historic restorations of theatres begin and end with a desire to recreate the past, brick by brick,"
says Bailey. "The result in most of these cases is a very expensive relic. Our driving principle in revitalizing the Civic is that the best experiences are the ones that are happening right now. We set out to take this beautiful historic structure and create a space where people can experience the best of the past while getting a glimpse into the future."

About the Civic Theatre

The country's first modern historic theatre, the Civic Theatre in New Orleans has a Traditional Body,
Pioneering Mind, and Timeless Spirit. Built in 1906, the Civic pushes the boundaries of past and future in
the form of historical architecture and technological innovation. Every performance and experience is as
meticulously designed as the venue itself. At the Civic, we are honoring the past, creating the future,
and reveling in the present.

About The Bowery Presents

The Bowery Presents is an independent promotion company based in New York City. With a core
business based around great music, its mission is to bring the best bands to the best venues and to
provide a great concert experience for fans and artists, along with reasonable ticket prices. Over the
years, The Bowery Presents has worked with a vast cross-section of some of the most talented
performing artists, including Willie Nelson, Aretha Franklin, LCD Soundsystem, Kings of Leon, My
Morning Jacket, Passion Pit and Deadmau5.
The company's activities center on programming live music in the venues it owns and operates including
several in New York and New Jersey--Terminal 5, The Bowery Ballroom, Mercury Lounge, Music Hall of
Williamsburg and The Wellmont Theatre in Montclair, N.J. The Bowery Presents also presents shows at
such New York City venues as Madison Square Garden, Radio City Music Hall and the Beacon Theatre,
and across the Northeast, in venues like the Constellation Brands-Marvin Sands Performing Art Center,
on the campus of Finger Lakes Community College in upstate New York.
The company launched The Bowery Presents: Boston, an extension of the company headquartered in
Boston to put on shows at Royale, The Sinclair, TT the Bear's Place and Great Scott, and reopened The
State Theatre in Portland, Maine--and recently acquired the Port City Music Hall there--in addition to
opening Union Transfer in Philadelphia.
The Bowery's most recent venture is its expansion into the South, working with music venues in Atlanta,
Georgia and New Orleans, Louisiana. For more information, visit The Bowery Presents South web site at
www.BowerySouth.com or www.BoweryPresents.com.