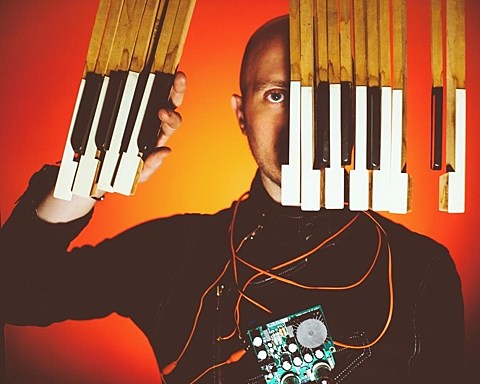 We were recently talking about who's playing on David Bowie's new album, and two of those musicians are teaming up for a NYC show tonight: keyboardist Jason Lindner and drummer Mark Guiliana. Tonight's set is from Jason's project Breeding Ground, and it happens at new Williamsburg venue National Sawdust (tickets). Here are the details:

Breeding Ground combines the two most successful projects of New York-bred pianist Jason Lindner: Now Vs. Now, his propulsive groove trio with bassist Panagiotis Andreou and drummer Mark Guiliana; and his big band, which started at the Greenwich Village basement club Smalls twenty years ago. For this new 11-piece band, Andreou and Guiliana sit in the engine room, while Lindner himself plays more piano than synths, leaving room for a string section, a horn section, and the eclectic singer-songwriter Jeff Taylor as the featured vocalist. Electro-acoustic, poly-rhythmic, cross-pollinated, dirty and mixed up, improvised and composed, multi-formatted and ever shifting, Breeding Ground is the epitome of liquid modernity.

In that recent Rolling Stone piece, Bowie producer Tony Visconti said the following about Jason: "[He] was a godsend. We gave him some pretty far-out chords, but he brought a jazz sensibility to re-voice them. Jason's synthesizer didn't have a computer with souped-up programs like Omnisphere on it. He would just do it with guitar pedals, making all the sounds unique."

Tonight is Breeding Ground's first NYC show since Winter Jazzfest 2013. They're planning to release their debut album in 2016 and just put out the "5am Again" b/w "Sparkle Wolf" single ahead of that. Listen below.

Jason and Mark's band Now vs Now also play NYC this month on December 30 at Rockwood Music Hall (stage 2). You can check out some live videos of them below, too.

Tony Visconti is also once again teaming up with Woody Woodmansey (who drummed on four early '70s Bowie albums) as Holy Holy to perform Bowie's The Man Who Sold The World album "and other popular tunes" on a tour that hits NYC on January 8 at Highline Ballroom. Tickets are on sale. All dates here.

Another musician contributing to the new Bowie album, LCD Soundsystem's James Murphy, DJs NYC this month on December 17 at Output. It's with his frequent collaborator Eric Duncan. Tickets are on sale.