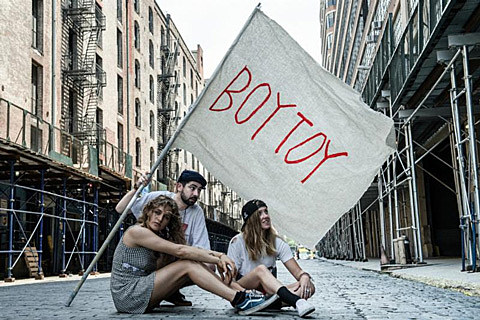 Brooklyn trio BOYTOY will release their debut album, titled Grackle, on October 2 via Paper Cup Music. The first single is a very catchy slice of poppy indie rock, "Postal," and you can listen to that below.

BOYTOY play NYC on Friday (8/7) at Shea Stadium with is a pretty terrific bill of Sharkmuffin, Charly Bliss, Lost Boy?, and Fruit and Flowers. Tickets are on sale now. The band will also be opening for some dates on La Luz's tour (not the NYC one, though) and finish out August with another NYC show, playing Silent Barn on 8/30 (rest of lineup TBA).

Friday's Shea Stadium show is also a record release party for Sharkmuffin's debut album. That LP is choc' full of snarly, attitude-heavy rock and you can stream the whole thing via Consequence of Sound, below.