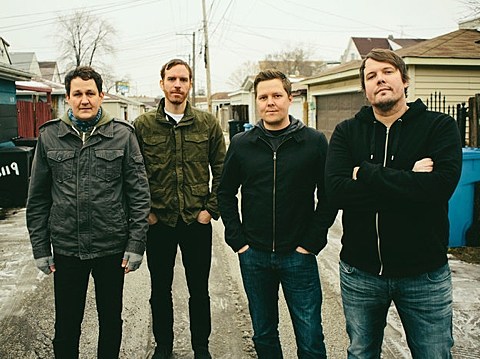 As mentioned a few times, reunited emo vets Braid are putting out No Coast (on 7/8 via Topshelf), their first full length since 1998's Frame & Canvas and first release since 2011's Closer to Closed EP. You've already heard the first single, "Bang," and now the band have unleashed the record's title track, via Entertainment Weekly. Unlike the vaguely post-hardcore "Bang," this one's punchy power pop closer to The Promise Ring (or Davey von Bohlen's post-Promise Ring band Maritime) than Braid's classic material. It's good too, and you can check it out below.

Braid celebrate Chicago venue Double Door's 20th Anniversary with The Smoking Popes in their home state this weekend (6/14), and in July they'll kick off a tour which was just expanded to include a Northeast run that hits NJ on 7/23 at Asbury Lanes and NYC on 7/26 at Music Hall of Williamsburg. No openers announced for those dates yet, but other tour dates are being opened by Pity Sex, Into it. Over It., and more. Tickets for those shows will be on sale soon via Ticketmaster.