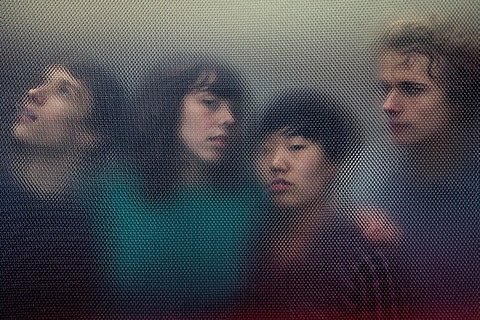 If you've got tickets to one of the Radio Dept. shows this week, be sure to get there early to catch Montreal's Braids, who I just saw play in their hometown a couple weeks ago for the M for Montreal Festival. I said then:

Braids use their voices more as another instrument than a conveyor of lyrics. There are points during their set when the harmonies meld with the band's stretched out grooves to achieve ethereal bliss worthy of The Cocteau Twins. Their set is better than the one I'd seen at Knitting Factory back in May, not to mention besting many of the "official selections" at M the following days.

If you didn't get tickets to one of the two shows with The Radio Dept, you can still catch Braids Monday night (11/29) at Mercury Lounge where they play with Arms. That's a good double bill! Maybe, just maybe, Braids will have copies of their debut LP, Native Speaker, which isn't out officially till January 18. Seven warm, long and languid tracks, it's a dreamy start to 2011.  You can download album opener "Lemonade" at the top of this post, along with the same track in remixed form.

Braids will be back in 2011, hitting the road with Baths and Star Slinger -- a tour that hits NYC on February 12 at Knitting Factory. All Braids tour dates below...