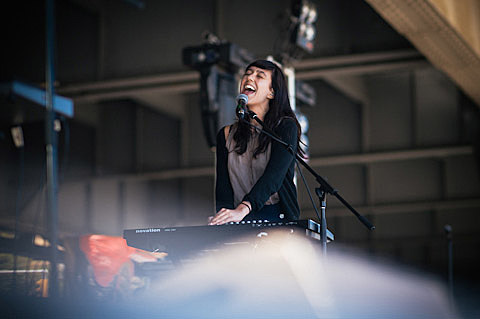 Montreal's Braids were just in NYC for ATP and while they were in the area, the closest club date they played was at Hoboken's Maxwell's a few days before ATP. Now they'll be returning to NYC during CMJ for a free, and far more intimate than ATP, show at Pianos on October 17 for the Tell All Your Friends day party. The show starts at noon and Braids are on at 6 PM. Other bands playing including Maus Haus, Blackbird Blackbird, Team Spirit, Solid Gold, Filligar, Triple Hex, Zulu Pearls, and still more. You can see the full list of artists and more details in the flier below. This show is the only announced date for Braids at the moment.

UPDATE: Braids also play a larger CMJ show at Bowery Ballroom on October 20 with Wild Nothing (more of their dates HERE and HERE), Weekend, and Forma. Tickets to that show go on sale Wednesday (10/10) at noon.

In related news, Raphaelle of Braids' other band, Blue Hawaii will be playing some CMJ shows too, including the Sam Mickens CMJ party at Bowery Electric on October 18 with Jack Ladder & the Dreamlanders, TOPS, and ZZZ's. It doesn't look like Sam Mickens is actually playing the show (he's been doing some booking for the venue lately), but you'll have a few chances to catch him playing in NYC this month and next.

Blue Hawaii also play the Arbutus Records Showcase at Death by Audio on October 20 with Doldrums, TOPS, Majical Cloudz, and Eola. As you may know, Arbutus is the label that Grimes was on before signing to 4AD. All the bands playing that DbA show are featured on a mix Arbutus made for CMJ which we're premiering in this post. Check it out, along with its tracklist, below.

As mentioned, Blue Hawaii will open for her in NYC at Bowery Ballroom on October 27 with Myths. Majical Cloudz, who are also on the Arbutus showcase and featured on Grimes' album, will open her show at Music Hall of Williamsburg (10/28) with Elite Gymnastics. All of Grimes' upcoming NYC shows are sold out.

The Braids flier, Arbutus CMJ mix, a song stream, and a list of all Blue Hawaii dates are below.