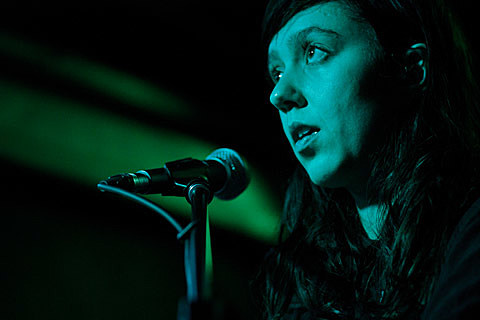 We've known for some time now that Montreal's Braids have reduced their lineup from a four-piece to a three-piece and also took their sound in a newer, more electronic direction. That new sound, which we saw in action at SXSW, is finally getting recorded and will surface this fall on a new album via Arbutus, the label that gave us Grimes, Doldrums, and Majical Cloudz. Details on that album are still forthcoming, but before it comes out, we'll get a taste of it from the band's new 12" single, In Kind // Amends, which comes out on June 11 via Arbutus in the US, Full Time Hobby in Europe, and Flemish Eye in Canada. Both of those tracks will appear on the album, and you can stream "Amends" below. The 12" will also include two exclusive tracks that won't be on the album.

Braids also have a few dates coming up, including a slot at the Arbutus Showcase during NXNE and a Brooklyn show right afterwards at Cameo on June 15 as part of the Northside Festival. No advance tickets for the Cameo show at the moment.