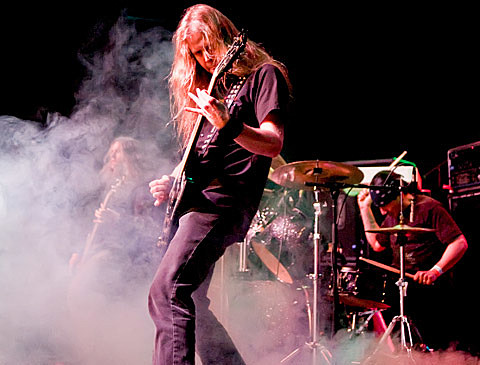 Its been eight long years since the Bay Area's Brainoil released their self-titled debut on Life is Abuse, and oh how I've missed them. The band's self-titled LP is a gem of underappreciated misanthropy, mixing bits of Buzzoven-y sludge-thrash with melodic-crust to create burners that just won't leave your head. In the time since the release of their LP, members of Brainoil have kept busy in projects with names like Laudanum, Stormcrow, Watch Them Die, Grimple, Pig Heart Transplant and Dead Language (who recently released their new LP), among many esteemed others.

But now the time has come for a new Brainoil LP! The Oakland band will welcome their new LP of chunky-riffed crust-sludge via 20 Buck Spin on August 2nd. Featuring seven new tracks of their signature hostile melodies, Death Of This Dry Season features "Gravity Is A Relic", which is available for stream below for the first time. Fans of early High on Fire, Eyehategod, Buzzov*en, Grief and even Tragedy (before those d-beats kick-in) take note, this is the record for you. Look for Death... to hit the racks of the 20 Buck Spin store in mid/late July with art courtesy of FEEDING (which includes Jon of Iron Lung).

Stream the new song "Gravity is a Relic", alongside more material from Brainoil below.

Fans of crust, sludge, and specifically Buzzov*en and Eyehategod.

Brainoil - Naiive in a Bliss

Brainoil - Dark Eyes Of My Past