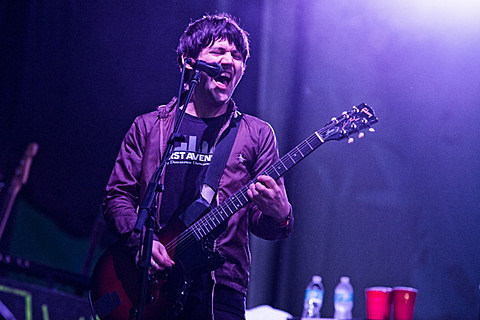 Brand New and Conor Oberst's punk band Desparecidos were both already announced for the Sundays of Coachella, and now the two bands have added two club shows together happening not long before the fest (unfortunately nowhere near NYC). Also on the Sundays of Coachella is Joyce Manor, who we just caught in NYC, and who toured with Brand New but didn't meet them, and were covered by Desaparecidos while touring with them. All BN dates (including Shaky Knees Fest) are listed below.

UPDATE: Desaparecidos also play a San Francisco show in between their Coachella performances with Joyce Manor and Touche Amore (who are also on the Sundays of Coachella).

In related news, Crime In Stereo were added as openers to three of The Movielife's reunion shows, including both sold-out NYC shows at Irving Plaza and their not-sold-out Philly show on 3/6 at TLA. Night 1 of Irving also has Pass Away (Mikey & Kellen formerly of I Am the Avalanche + Eric of Crime In Stereo), and Zumo Kollie will open Irving night 2 and Philly.

You may remember that The Movielife's last reunion show in NYC was surprise-opened by both Crime In Stereo and Brand New, and that all three of those bands had members in The Rookie Lot.

Updated Movielife dates and the list of Brand New dates, below...