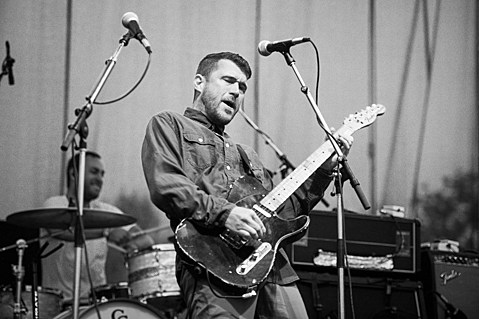 Like fellow Long Island emo band Taking Back Sunday has been doing, Brand New will be tackling some old albums in full this December. But unlike TBS, who's only been playing their debut, Brand New are doing 'em all. They've got two California shows and two NYC-area shows scheduled, and will be playing two albums each night (plus all B-sides relating to each album). The NYC-area shows happen on December 20 at The Paramount in Huntington, NY and December 21 at Starland Ballroom in Sayreville, NJ. Tickets for the Paramount show and the Starland show go on sale Thursday (11/14) at noon. TIckets for all dates will also be available here. All dates are listed below.

Of the many '00s-era emo bands who either got tainted by major label/MTV exposure or broke up before they could, Brand New are one of the few who continued to progress drastically into interesting and unexpected territory from album to album (except, in my humble opinion, Daisy, which I felt was a bit of a regression but still a solid fourth album). 2001's Your Favorite Weapon was broken-hearted pop punk at its finest with all the quotable lines your away messages needed, and 2003's Deja Entendu took that into darker territories that were rarely ever pop or punk, but still catchy and heavy. (And the quotable lines didn't go anywhere either, I mean "Okay I Believe You, But My Tommy Gun Don't.") Then came 2006's The Devil and God Are Raging Inside Me, a total revelation that took elements of post-rock, post-hardcore, noise rock, and other alternative subgenres without ever really succumbing to any of them. Add the weightiest lyrics they've ever written to that, and they've got (for my money) the best emo album since Diary. I always felt like much of Daisy was a bit of TDAGARIM pt. 2 and not the same level of progression as the last three, but it lives up well and it's still cool to hear them making totally weird songs like "Be Gone" and "Vices."

Brand New posted a message with the show announcements saying that part of their reason for doing this is that they've decided to work on new material. Read the message in full, along with some videos and the list of tour dates, below...

To our fans and friends,

The recent shows we played around and including the Riot Fests in Colorado and Chicago were such a great time for us and we wanted to thank you all for the response, once again, to our erratic and spontaneous show scheduling. We had so much fun. So much, in fact, that we all decided we would like to do a few more shows before the end of the year. And since we have been working on some new material, we decided that it would be fun to try to go back and play all of our previous material.

That's right, all of it.

So we have booked 4 shows, 2 on the east coast and 2 on the west (sorry middle America), and we will play two complete albums each night. Since we want to cover everything, we are going to try to include all B-sides relating to each album as well on their corresponding nights.

We hope you are all well, and we will see you soon.