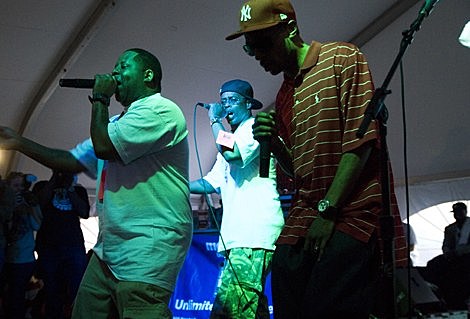 A Grand Puba-less Brand Nubian will play Knitting Factory on September 1st (tickets) in honor of their classic, yet controversial In God We Trust LP:

[The lead single] "Punks Jump up to Get Beat Down"... was met with controversy over blatant homophobic content, referencing the Sadat X line "I can freak, fly, flow, fuck up a faggot/I don't understand their ways, I ain't down with gays." Despite the controversy, the single charted on the Billboard Hot 100 at number 77. Later versions omitted the line, including the version on the greatest hits compilation The Very Best of Brand Nubian. -[Wikipedia]

In a 2009 interview, Sadat X revisited his ideas on the lyric. That interview, some video, and more, below...

HIPHOP.COM: ...Sadat - how did you feel about the way ["Punks Jump Up To Get Beat Down"] was received at the time, and what're your feelings about the lyrical content of it now?

Sadat: I mean, I didn't really feel it was all that controversial. I guess people twisted the word 'f----t' around and stuff like that - you know, that's just what it was at the time, man. That's how we was feelin', and it came out as such. Some people protested it, we caught a lil' flack for it, but nothin' to stop the movement of it. When I said 'f--- up a f----t,' I didn't mean it in the sense of gays really like that: that's just a word that we called somebody soft.

HIPHOP.COM: The thing that struck me much more was the line afterwards, where you said 'I don't understand their ways and I'm not down with gays.'

Sadat: Yeah, and I mean, I was young then, and I wasn't down with the gay people, and that was just comin' from a young mind. I mean, you know, I'm still really... I'm not gay, but if somebody is gay, that's their prerogative. That's the way they choose to live their life, and I can't... I can't do anything about it. You know? In my circle of people, I just don't have any gay friends or anything. That I know about.

HIPHOP.COM: When you perform that song now, do you change the lyrics?

Sadat: Sometimes, dependin' on the crowd, and the feeling of it. I can usually tell where I can get away with that, and where I can't get away with it at. You know. It's just a feeling - I can't even explain how I do it, I just know that, 'OK, I can say that here,' whereas opposed to some places I can't say it.

Sadat X and Lord Jamar will be joined by The Legion, as well as A&R man / producer Dante Ross

The Black August Hip Hop Project strives to promote human rights though supporting and influencing the global development of Hip Hop culture. By facilitating exchanges between international communities where Hip Hop is a vital part of youth culture, we promote awareness about the social and political issues that affect our global communities.

Hmmm. Human rights, eh? Sadat X will be on stage alongside killer MCs like Dead Prez and Pharoahe Monch and many others. Tickets are on sale.

Brand Nubian - "Punks Jump Up To Get Beat Down"

Brand Nubian - "Love Me or Leave Me Alone"