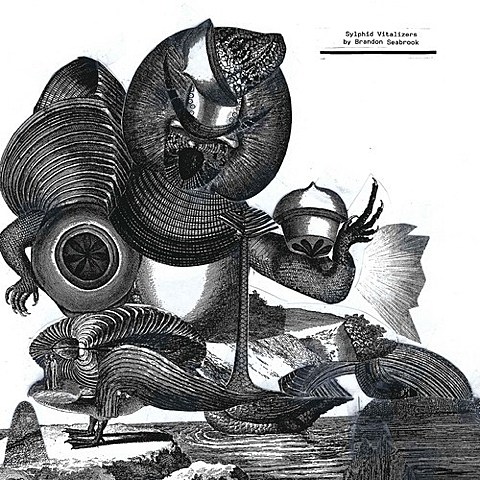 Brandon Seabrook needs to be heard, not read. There's not much you can glean from written descriptors as Seabrook's sound will always contrast whatever tag is placed upon it. For instance, he plays four-string banjo, but he's no folksy wannabe. He shreds the hell out of an electric guitar in search of circular micro-patterns, but he's not Mick Barr. He composes out-there avant-garde, but his music has a direct impact. His M.O. is to set expectations askew, changing the perspective just enough to discover new territory in places once thought to be extensively mapped and codified. That even goes for the title of his new album, Sylphid Vitalizers. Sylphid: "an air elemental." Vitalizer: "to endow with life; animate." In other words, "sound." But, jeeze, Sylphid Vitalizers sounds like little else.

Seabrook's greatest strength is that his creations don't come off as accidents. This is deeply considered stuff, though it's not overwrought and it doesn't require graduate school to get. That's uncommon for something so experimental. Sylphid Vitalizers isn't esoteric, it's easy to feel its effect even if avant-garde has never been your thing. How? Well, it's not really avant-garde in the way we've grown to consider it. In the same way, Sylphid Vitalizers is ostensibly a solo guitar/banjo album though it's hard to mistake it for one. Opener "Ballad of Newfangled Vicissitudes" has a tone cluster built from multitracked, turbo-picked banjos that might as well be a swarm of bees instructed to replicate György Ligeti. Then a pounding drum machine borrowed from Godflesh reroutes the song. Bang: Suddenly, it's Bob Drake covering Slayer in The Shunned Country.

The rest of the album follows suit as much as a mind-effing can, tweaking anticipated turns with multifaceted, dynamic compositions. "Selfodomized Poltergeists" goes from Guitar Center shredder to a DJ searching for a loop. "Mucoidal Woolgathering" starts like Koyaanisqatsi crossed with Deliverance and ends with the gentle hum of a hyperbaric chamber. "Cabeza Spams & Aural Championships," the highlight, is a soundtracked-by-metal video game cartridge someone dunked in water. (The twist in that one? Chiming Derek Bailey strums are chewed up by silence.) Naturally, all of that reads like madman ramblings. Yet, when Sylphid Vitalizers is spinning, it's tight, cohesive, and it makes all of the sense in the world.

Sylphid Vitalizers will be available through New Atlantis Records on June 26 (preorder). Brandon Seabrook is also going on a tour which kicks off in NYC at Cake Shop on Wednesday (6/18) for a record release gig with Bangladeafy, Judith Berkson, and Cleric. Tickets are $8 at the door. Brandon will also be on the Goddamn Dave Hill Show on WFMU tonight (6/17). Stream Sylphid Vitalizers, with the list of tour dates, below.