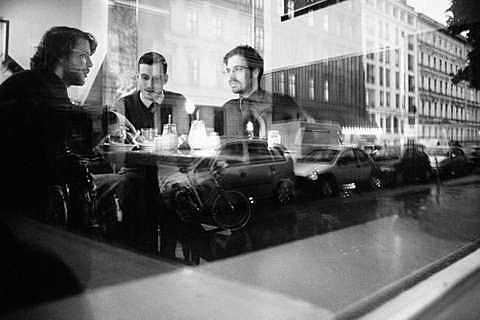 When Brandt Brauer Frick were over last year I wrote this about them:

Somewhere between techno and the work of modern composers, German trio Brandt Brauer Frick make the kind of music you could imagine being played at Alice Tully Hall or a Brooklyn club. It's an alluring hybrid which can be heard on their new album, Mr Machine, which is out this week on K7. Apreggios still bubble, but in this case they're made by harps and vibraphones

BBF are returning to the U.S. this summer, which playing Lincoln Center Out of Doors on August 2, the American debut of their nine-piece Ensemble. (They've previously played here as a trio.) Then BBF as a trio will play Santos the next night (8/3). It's not quite Alice Tully Hall and not quite Brooklyn but almost. Lincoln Out of Doors is free and tickets to the Santos show go on sale Friday (6/8) at 10AM.

While over here, Brand Brauer Frick will also play the Osheaga Festival in Montreal on August 4. You can stream BBF's album Mr. Machine, watch a couple music videos, and check out a list of all tour dates below.