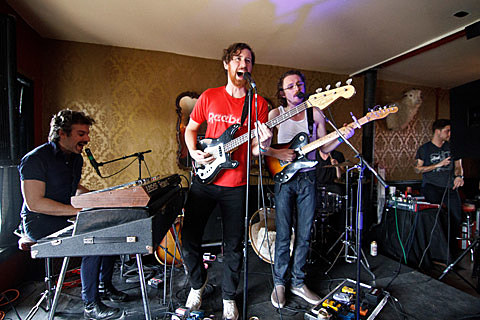 In case you need a last-minute excuse to get out of town, and you're not going to the sold out Lollapalooza in Chicago, single day tickets are still on sale for the amazing-looking Osheaga Festival in Montreal this weekend. The Canadian festival lineup includes names like The Black Angels, M83, Sigur Ros, Feist, Garbage, SBTRKT, The Shins, Justice, Polica, The Walkmen, A$AP Rocky, Florence & the Machine, Austra, The Weeknd, and even Passion Pit who cancelled most other upcoming dates (but who are also playing Lollapalooza).

The Montreal festival will also feature sets by German techno composers Brandt Brauer Frick and Canada Arts & Crafts band Zeus. And though Zeus and BBF don't have much in common musically, they are both now spending a couple of pre-fest days in NYC, starting with shows tonight (Thursday, 8/2).

As previously mentioned, "Brandt Brauer Frick Ensemble" will make their U.S. debut as part of Lincoln Center Out Of Doors tonight. "Strings, horns, and piano go techno with the help of a Moog synthesizer in the alchemic reactions of Germany's electro-orchestra, the Brandt Brauer Frick Ensemble, in their first U.S. show." The free show also includes "On Sacred Ground: Stravinsky's Rite of Spring arranged and performed by The Bad Plus."

Zeus meanwhile play the Rock Shop in Brooklyn tonight (8/2) with Robbers on High Street, and then play again at Mercury Lounge on Friday (8/3) with ARMS. Tickets for the Rock Shop show and the Mercury Lounge show are on sale now. The shows are part of a tour which brings them back to Canada to play Osheaga by Sunday. All dates are listed below.

Not surprisngly, Arts & Crafts are well represented at their country's music festival, and in honor of that they're giving away a prize pack of CDs on Facebook. Those CDs include Zeus, Feist, Dan Mangan, and Bloc Party who are signed to Arts & Crafts in Canada. Frenchkiss Records is putting out the new Bloc Party record in the US where Bloc Party visit after Osheaga for three sold out shows at Terminal 5 with The Drums. One of those shows, the 8/8 one, will stream live on Bowery Presents' Youtube channel. We have a pair of tickets to give away for the 8/9 show. Details, the trailer video for the stream, a new Bloc Party song and more tour dates, some with Ceremony, below...

--
For a chance at winning tickets to Bloc Party at Terminal 5 on August 9: either tweet something that includes both @BrooklynVegan AND "BLOC PARTY" in the tweet, or send an email to BVCONTESTS@HOTMAIL.COM with the subject line "BLOC PARTY". Include your first and last name in the email. We'll pick a winner at random and contact them with more details. If you enter by email, it will not be shared with anyone else. Good luck!