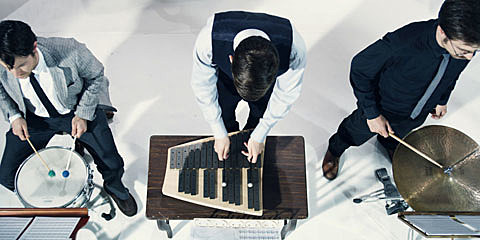 Somewhere between techno and the work of modern composers, German trio Brandt Brauer Frick make the kind of music you could imagine being played at Alice Tully Hall or a Brooklyn club. It's an alluring hybrid which can be heard on their new album, Mr Machine, which is out this week on K7. Apreggios still bubble, but in this case they're made by harps and vibraphones. Check out an MP3 of the single "Pretend" at the top of this post which features Emika who opened for Amon Tobin in Brooklyn last night (and does again tonight). The video for that song is below.

While they've left their nine-piece Ensemble in Germany, Brandt Brauer Frick will be touring North America as a trio, which, as previously mentioned, kicks off Thursday night (10/27) at Glasslands (with Humans and Populette). All BBF tour dates and some videos are below.