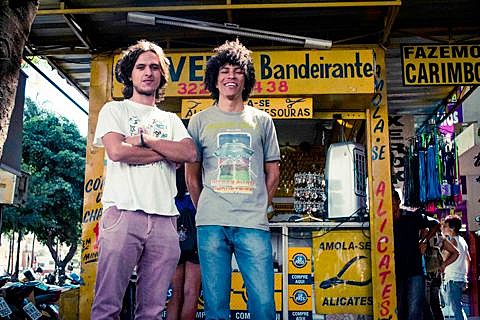 Boogarins are Fernando Almeida and Benke Ferraz, who hail from Goiânia, Brazil. They met and began recording music together in high school. The results: psychedelic pop that owes much to their cultural forefathers Os Mutantes (who will be here next month) but also The Kinks, early Pink Floyd and other paisley bands of the era. But their songs also have an undeniable youthful exuberance which -- along with some serious playing and songwriting chops -- adds much to their sound.

Their early home recordings, from before they started playing live, have been collected on As Plantas Que Curam which came out via Other Music Recording Company this week.  You can get it on cassette too via Burger. We've got the premiere of the video for the dreamy, pastoral "Despreocupar" which you can watch in this post. You can stream the whole album (via The Fader) in this post too.

No North American tour dates yet but look for Boogarins to head this way in March 2014 for SXSW. Video and album stream below...