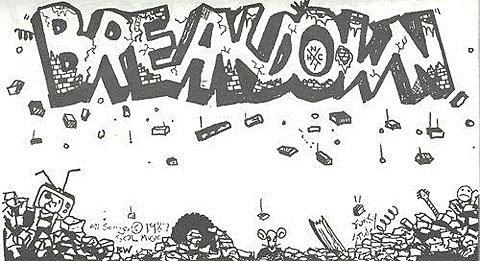 Breakdown was started in 1986, during the resurgence of the hardcore scene. Despite being a NYHC band, being based in Yonkers Breakdown didn't have the Lower East Side Crew-mentality of Warzone and Agnostic Front. By a similar token, unlike some of their other contemporaries like Gorilla Biscuits and Youth Of Today, Breakdown was not a straight edge positive band. They are considered more along the lines of Sheer Terror for their more metallic sound and less-than-positive lyrics. -[WIki]

BrooklynVegan is proud to announce that Breakdown's original 1987 demo lineup (who reunited at Chaos in Tejas and is considered by some to be one of the best NYHC demos/releases of the era) will reunite to play Public Assembly on December 22, with support TBA. Tickets are on sale for this 18+ show.

The appearance of this lineup will be the first in NYC since guitarist Carl Porcaro, bassist Rich McLoughlin and drummer Anthony Drago split from the band to form Raw Deal in 1988 (which eventually became Killing Time).

Stay tuned for the rest of the bill, but for now, check out vintage video and audio below.