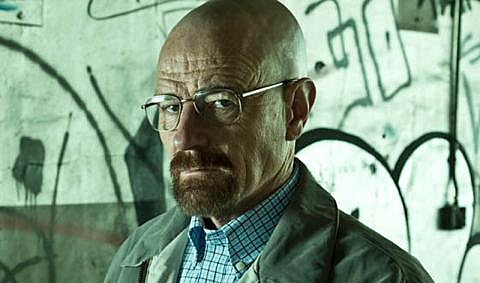 As you probably know, AMC's awesomely gut-wrenching series Breaking Bad is about to start its final season beginning Sunday, August 11. (Only eight more episodes!) In anticipation of this, the Museum of the Moving Image will present "From Mr. Chips to Scarface: Walter White's Transformation in Breaking Bad," an exhibit of props and costumes from the series. The exhibit runs July 26 - October 27 and is included with museum admission. Items on display include:

the yellow Oxford shirt and khaki pants typical of White's daily wear; the black pork pie hat, black jacket and pants, and green shirt favored by White's alias, Heisenberg; the briefs worn by White during his first methamphetamine-making session, and the hazmat suit, gas mask, apron, and boots used in subsequent "cooking" scenes. Props include those relating to White's cancer treatment--pharmaceuticals, PET scan, strands of loose hair (the result of his chemotherapy)--as well as objects featured in pivotal scenes in the series, including the pink teddy bear and Walt Whitman's Leaves of Grass. Also on view will be selected clips from the series, and behind-the-scenes footage.

In addition, show creator Vince Gilligan will be on hand for a special event on July 28, a conversation about the creation and evolution of the series and Walter White's character, with highlights from the series interspersed. Tickets for that are on sale now.

Additionally, Gilligan and much of the Breaking Bad Cast will appear at a talk at TheTimesCenter on July 30. That event is sold out too... but will be broadcast on the web live at 6:30 PM EDT.

And for those who haven't seen the series yet and have a lot of free time on their hands, the Film Society Lincoln Center is screening the entire series (to date), in daily season marathons from July 26 - July 30. Season 1 is July 26... and the first part of Season 5 happens July 30. The marathons are free and open to the public, based on capacity.