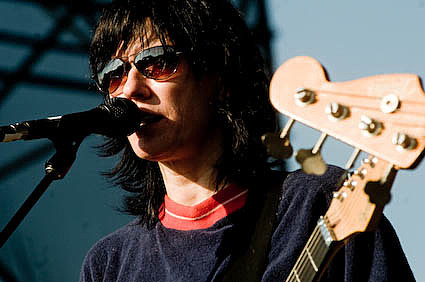 Early on in the set, bassist Kim Deal remarked that she found the island "very pretty", before giggling into the microphone. [NME]

The Pixies followed that show with an invite-only release party for their Minotaur boxset the next night in London. (That boxset includes each of the five Pixies studio albums cut onto LP/gold-plated CD/Blu-ray audio/DVD/etc.) Drowned in Sound was there and wrote...

Doubtless you know/saw enough of the last reunion tour to be well aware the Pixies are still very, very good at playing Pixies songs, and a full review would be kind of gratuitous: they were frickin' awesome.

Set lists for both shows are below.

There's no word on any additional Pixies dates yet, though Frank Black has announced some solo Black Francis shows, and is touring with his Grand Duchy project this summer. That group plays NYC's Siren Fest on July 18th, with a show the night before in Hoboken. Updated tour dates (FB and GD) are below.

The Pixies' Kim Deal has shows this summer too, with The Breeders. They'll be at Sled Island Fest in Calgary this weekend (June 26th). The band's also announced several August tour dates. Those include NYC shows on August 18th and 19th at the Bowery Ballroom. Tickets for both nights go on presale Wednesday, June 24th at noon. General sale starts Friday at 11am.

Kim and Kelley Deal of the Breeders will lso be performing as part of The Long Count, a BAM commissioned project by the National's Bryce and Aaron Dessner. That premieres in Brooklyn in October.

Pixies set lists, with all tour dates, below...