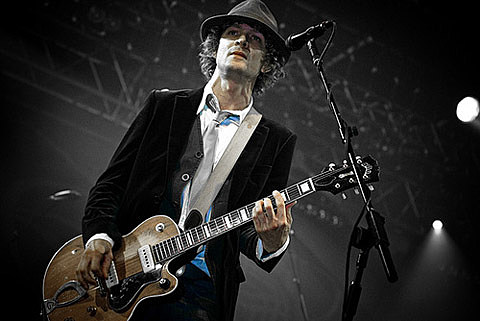 According to a recent report, record sales were actually UP in 2011 thanks in part to Adele's 21. Perhaps sensing the upward trend, and inspired by his friend and bandmate Jack White (who is keeping busy and will be on TV tonight), Brendan Benson has announced the launch of his own record label and publishing company called Readymade (which he actually created in the 90s but mainly just as "a concept due to a lack of resources to build a proper record label").

One of the label's first releases will be his own new LP What Kind of World, due on 4/21. Nashville's Young Hines are the first signees to Readymade, and they'll release their new LP Give Me My Change on 4/10. A Benson-produced album from Irish duo The Lost Brothers is also in the new label's future.

Brendan Benson and Young Hines will tour together too. Those dates, listed below, include May 5th at Bowery Ballroom. Tickets for the NYC show go on AMEX presale on 1/11 with regular sale 48 hours later. Benson will also be at SXSW.

All BB tour dates and some videos below...