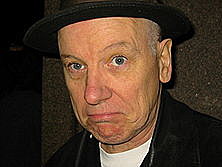 "Brendan Mullen, who nurtured the early Los Angeles punk-rock scene in the 1970s with his club the Masque and later chronicled it in articles and books, died on Monday in Ventura, Calif. He was 60 and lived in Los Angeles." [NY Times]

According to Flea, "Brendan Mullen had a lot of friends. [he] was one of them."