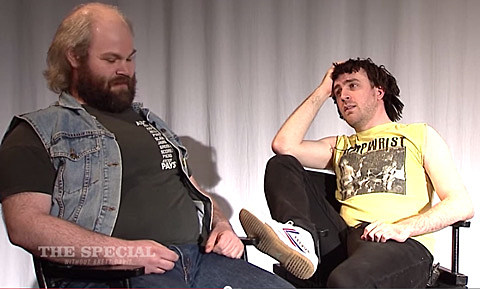 When Chris Gethard left cable access for cable television (his show will debut in May via on Fusion), the guy who took over his Manhattan Neighborhood Network show was Brett Davis. You may know Davis from New Brunswick basement punk shows, from the many NYC comedy shows he appears at, or more recently from TCGS where he played Smith, a character that inspired a lot of hate mail, or you may remember him from his mid-'00s alter ego MC Steinberg (maybe you remember MC Steinberg from public access show New York Noise). 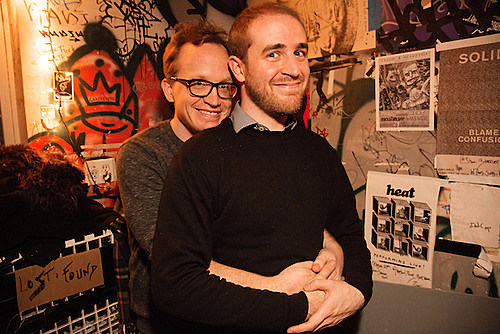 Brett's public access show is called The Special: Without Brett Davis and Chris Gethard talked him up to Laughspin:

"I think the Chris Gethard Show fans will love him," Gethard tells Laughspin. "He's innovative and smart and likes to play with things in a way that I think will totally embrace the anarchy of public access and all the different ways you can connect to people while using it. I don't think his show will be like mine at all. I think it will be totally unique and reflect his sensibilities. But I really think we managed to do some innovative stuff on public access and if there's one guy in New York who I think is an innovator right now, it's Brett."

Amongst a community of peers and fans in New York, Davis is known for immersive character work on stage. Brett cites Scharpling & Wurster as a major influence, which shows in his work. The comedian has built somewhat of his own "Newbridge"-style universe in New York. The workhorse comedian runs three regular shows per month, all of which he hosts in the guise of an ever-expanding amount of characters. Usually, carefully plotted narratives play out over the course of each show. You can also expect absurd audience participation bits, choreographed but convincing on-stage violence and a smattering of other surprises. In other words, fans who loved the chaotic and unpredictable nature of the Gethard show are in good hands with Brett Davis.

Each week, Brett plays a different character (hence the "Without" part of the title) as guest host. One of the regular players on the show is Darren Mabee, who was a fixture at NYC shows in the mid-'00s and had the band We Are the Seahorses. You can watch the most recent episode, hosted by "punk guru" Craig Evanhalen, below.

You can catch Brett in action as host of both of the BrooklynVegan-presented Red Bull Sound Select shows with The Menzingers: April 11 at The Court Tavern in New Brunswick, NJ with Big Eyes and Cheerbleeders, then April 14 at Baby's All Right with Big Eyes, and Crazy & The Brains. Both shows are $3 at the door with RSVP, or $10 without. No advanced sales. RSVP for NJ here (21+) and NYC here (18+). Even if you RSVP, entry is first come, first served.

You can also catch Brett this weekend in NYC. Tonight (4/3) he'll be at BHQFU on Avenue A, for the "Quinceañera de Elisa" with Brian Fiddyment & Edy Modica, Becca Kauffman, Mary Houlihan & Sam Taggart, Colin Burgess and hosts Lorelei Ramirez and Ana Fabrega. On Saturday (4/4) at The Creek, he'll be appearing as part of "Underbelly" with Nick Vatterott, Maria Heinegg, Tony Zaret, Courtney Maginnis, Joseph Klein, Clark Jones, Will Winner, Amber Nelson, and host Nick Naney. He's got a bunch of other appearances lined up and all dates are listed below...

4/8: The Special Without Brett Davis with Ava Luna on MNN and online at 11pm

4/15: The Special Without Brett Davis on MNN and online at 11pm

4/22: The Special Without Brett Davis on MNN and online at 11pm

5/7: The World is Flat: An Evening of Incorrect Opinions (hosted by Mike Abrusci) at Over The Eight, 594 Union Ave, Brooklyn