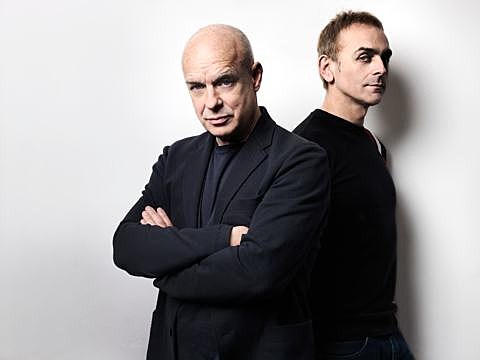 A lot of the nicer cities I know are cities built on hills, and the cities are beautiful because the buildings have a challenge to adapt to. They have to mould themselves around the geology that they've formed upon. And that always makes for very interesting buildings, because they can't just be blocks, they have to somehow morph around the environment. A lot of the constructions on the album were deliberately irregular and awkward.

I had a big collection of 'beginnings' sitting around waiting for something to galvanise them into life, to make them more than just 'experiments'. That something turned out to be Karl Hyde.

Brian Eno and Underworld's Karl Hyde will release their collaborative album, Someday World, via Warp on May 6. Both Eno and Hyde sing on the record, and the two even did the album art together. No music has been released yet, but you can check that out artwork and tracklist below.

Eno, busy creative guy that he is, also features on new albums from Damon Albarn and Owen Pallett.