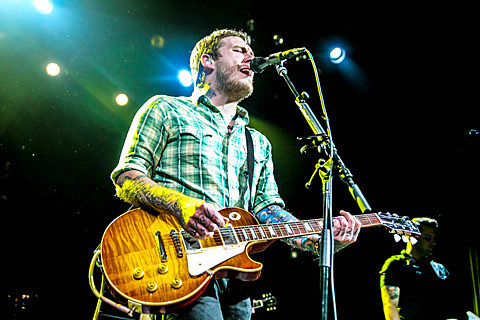 As we just mentioned, The Gaslight Anthem came to NYC over the weekend for three shows (Pier 26 on 7/26 and 7/28 and Irving Plaza on 7/27). At the Irving Plaza show, frontman Brian Fallon started an a cappella crowd sing-along of Nelly, Bone Thugs N Harmony, and Lady Gaga, but the next night on Pier 26 when he tried a similar thing, the crowd didn't react nearly as well.

Someone in front complained about the song choice (Lady Gaga's "Bad Romance") and then tons of crowd members proceeded to yell "BRUUUUUUUUUUCE." Brian responded with something along the lines of "We're not doing that, if you wanna hear his songs, go see him," to which he got many cheers, but the crowd soon yelled "BRUUUUUUUUCE" again, and then he said, "forget it, we're just gonna play Gaslight Anthem songs."

Now, in a tumblr post titled "Tonight You Have Broken My Heart," Brian addressed that instance with a lengthy letter addressing those comparisons the band has long been pegged with, and the new paths the band plans to take. It reads:

Tonight we played the third show of a three night stand in NYC. It was a beautiful venue at Pier 26 and we played with one of my favorite bands the Hold Steady. But tonight, after the show, I found myself with some things I feel I need to say that have been a long time coming...

I play music because something stirs inside of my heart and it needs to be expelled. I have found from a young age that music is the avenue which relieves me. It allows me to say words and choose notes that speak to my own soul. It comforts me. There are people who have found something in my band's songs that speak to them as well. I've met some of them, they come to our shows and have purchased our records because they've found something that speaks to them somewhere in the things we have created. That, to me, is amazing.

However, I feel it necessary to address that we are The Gaslight Anthem. We play Gaslight Anthem songs. We're not the band you think we may be akin to. My name isn't Bruce, It's not Eddie, or Joe, or Paul either. If you'd like to hear their songs they are readily available and the former two tour quite often. You should go see them, they put on great shows. They play long sets over two hours sometimes. It's truly amazing to watch them at their craft. But again, we're not them. We have a different set of rules. We're on a different course, because we aren't them and can't be them. We have to find our path, because that's the only honest thing we can do. Which is where I find myself now, proud of what we've done, and where we've come from, but it's time to find the next thing. Time to create a new sound, time to create the next Gaslight Anthem.
We will always play those songs, but we will never be that band again.

Pictures from Sunday's show at Pier 26 are coming soon. Brian's letter continues below...

When I was 27 years old we wrote a record called the '59 Sound. It was our first break. We got to work with a wonderful man named Ted Hutt who taught us things we never would've known without him.

Bands who have long careers change. Drastically. That doesn't mean they no longer like what they did in the past or what got them where they are. It means they have to create and be true to who they are RIGHT NOW, not be true to what people want them to be.

To say that bands don't owe their fans anything is wrong. They owe them the truth of their art. They owe them a performance of songs they've written at that specific show as they are that evening. The ticket doesn't promise what happened at a show three years ago, or five years ago, or ten years from now. Live music is beautiful that way, because it's that night only. It'll never be that show again.

When you go see a band it's a gamble, like going to see a movie. You may not like it in the end. But you can't change it. It is what it is. The only difference between bands and movies is that one show might be 90 minutes, one show might be three hours. But the ticket just says what band is playing. It doesn't make promises of that cover they did once,
or that guest they had last week, or... your favorite song.

Here's an example of what I'm talking about...

I love the movie Kill Bill. I love Uma Thurman, but no matter how hard I wish or yell at the screen, or insult, or wave my hands. She's not coming over after the film. No matter how many times I watch it. It's also not gonna change, it's not gonna add a scene or delete a scene just because I want to get to my favorite part quicker. She's not gonna make out with me because I think she's pretty. She doesn't owe me anything because I like her or her movies. She is not her work.

I am not my work. I am a guy who happens to have felt some things and gotten in a band that put those things to music and a few people thought it spoke to them. That's a miracle to me that I remember everyday.

To our fans... please bear with us through this awkward period of finding our new legs. I'm being honest with you here because I am grateful for your loyalty to my band.

To the spiteful reviewers... just remember no one's singing for you.

I'm asking openly and humbly that if anyone would like to come to a Gaslight Anthem show, please come because you want to see what we're doing on that night. Don't come to see Bruce, he won't be there. Don't come to hear a cover, it probably won't happen. Don't come to yell at me when I'm trying to share something with the audience to reach out to them about something I feel is moving me. For some reason I'm the one with microphone, which may be a mistake entirely. But if you want one and have something to say, please start a band, get in the van, sleep on floors, and work your butt off and maybe one day I'll find your band and I'll come see you play.

But I swear I will not yell at you or call out for you to play one of your influences songs... because I'll be there to see you.