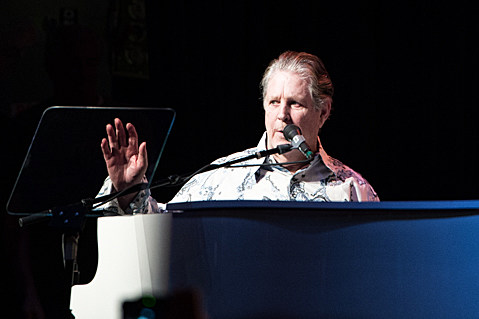 A lot of people are calling Brian Wilson a liar for his false reports on the Iraq War. Though unless the former Beach Boy has a secret history as a news anchor that we're not aware of, chances are they mean NBC's Brian Williams (of BriTunes fame!), who was suspended for 6 months after admitting to those exact same accusations.

It may have seemed, however, that Brian Wilson was a liar for saying Frank Ocean and Lana Del Rey would be on his upcoming solo album. Though one of his reps has since told Pitchfork that he did intend for them to be on it, but scheduling issues wouldn't allow it.

Brian also spoke this week in a new video for Hollywood Reporter about the upcoming biopic on his life, Love & Mercy, which will screen at SXSW. You can watch a three-minute video of him and members of the cast speaking about it, below.

Meanwhile, Brian still hasn't announced a tour in support of his new album, but he did announce he'll be performing at New Brunswick, NJ's State Theatre 2015 Benefit Gala concert on May 16. Tickets go on sale Friday, 2/20 at 10 AM with a presale starting Thursday, 2/19 at 10 AM. Gala tickets are $700, but concert-only tickets range from $55-$150.