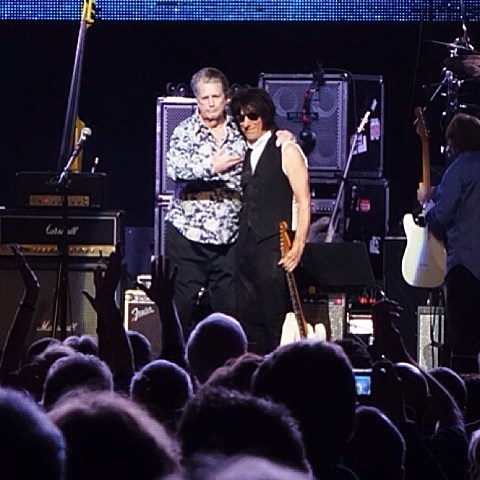 Beach Boy Brian Wilson and guitar maestro Jeff Beck are on a tour together (that also includes ex-Beach Boys Al Jardine and Dave Marks), and that tour came to NYC for a show at Beacon Theatre last night (10/15). It was doubly special because it featured Blondie Chaplin (who sang lead on the album version of "Sail On Sailor"), but triply special because Brian unexpectedly performed the classic 1966 Beach Boys album Pet Sounds in its entirety! From Rolling Stone's review:

Jeff Beck is along for the ride, too, and is in the middle of recording a new album with Wilson. At first glance the pairing seems completely incongruous, since the 1960s British blues rock scene had little in common with the Surf Wall of Sound that Brian created 5,000 miles away in Los Angeles. But the minute the former Yardbird played the opening notes of "Surf's Up" on the guitar - flawlessly recreating the original vocal melody while Wilson and his bandmates contributed gorgeous backing vocals - the pairing made complete sense. These are artists with a lot of mutual respect, and they've found a way to perfectly compliment each other.

The show began promptly at 8:00 PM with Wilson and his band performing a beautiful a-cappella rendition of "Their Hears Were Full of Spring" by the Four Freshman, a formative influence on Wilson. After getting the crowd on their feet with "California Girls," they brought out Blondie Chaplin - a man whose tenure in the Beach Boys stretches from early 1972 all the way to late 1973. He cut two albums in that time period, and song lead on the classic "Sail on Sailor." Forty years later, he delivered it with pretty stunning vocal power and followed it up with the fan favorite "Wild Honey."

It was at this point that Wilson dropped the bomb: not only were they going to play "Wouldn't It Be Nice" next, but they it would be followed by the rest of Pet Sounds in sequence. It's the first time he's done the album in many years, and the first time he's ever done an album without any prior announcement. The audience was stunned into silence, and didn't seem to even believe it was true until sometime around "That's Not Me." They didn't have the string section from the Pet Sounds tour of 2000 - 2001, but the band was clearly up for the challenge.

Pet Sounds is a very demanding album for Wilson vocally, and although Jeff Foskett handled many of the higher notes, it was clear Wilson gave it everything he had. "I Just Wasn't Made for These Times" has rarely been so touching, and "Don't Talk (Put Your Head on My Shoulder)" was incredibly moving. "Now we're going to play, I think, the best song I ever wrote," he said before "God Only Knows." "And I've written a lot of songs." Nobody can match Carl Wilson's original vocals, but he still did a stellar job and got a huge standing ovation.

Afterwards, Jeff Beck took the stage for his portion of the set, which included Brian joining him for a few Smile classics, "Our Prayer," "Child Is Father of the Man," and "Surf's Up." Check out a couple videos and the full setlist below.

The tour continues in NJ tonight (10/16) at Wellmont Theatre, and after that Brian will be hanging around to play the Right to Rock benefit (which honors Darlene Love) on Thursday (10/17) at Cipriani (55 Wall Street) with Elvis Costello, Jake Clemons, Paul Schaffer and many more special guests. There will also be a live and silent charity auction, which features "prizes like dinner with Maureen & Steven Van Zandt, a guitar signed by Bruce Springsteen and a private tour of Carlo's Bakery." $1000 tickets are available, and proceeds benefit Little Kids Rock.

Videos and the setlist below...