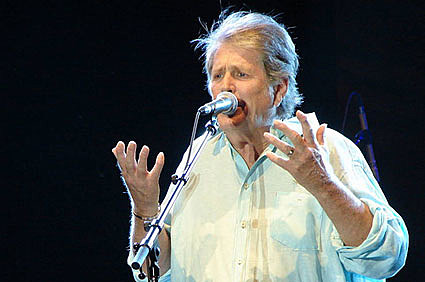 In response to several disgruntled fans, Brian Wilson and his wife and manager Melinda Wilson have decided to refund fans'tickets for his July 11th New York City concert at Hammerstein Ballroom.

Fans complained that the show, which was a benefit for the Stand Up For A Cure cancer benefit, ran up to several hundred dollars but had poor visibility for some seats, and only contained a 75-minute performance by Wilson. Wilson performed with a scaled-back band, and his setlist lacked Beach Boys or solo rarities.

Melinda Wilson chatted with fans on brianwilson.com and said that Brian wanted to refund the money to fans who were unhappy by having them send their ticket stubs to their publicist for reimbursement.

Melinda said in her various messages: "Brian saw the posts and asked me to respond. He's really sensitive to all of your feelings and doesn't want to offending anyone. He wanted to make this offer to keep everyone cool (as he said)... With the exception of the charity show, most of these ticket prices are less than they have been in the past. On (July) 17th, the show (in Brooklyn, New York's Coney Island) is FREE please take advantage of that. Hope this clears the air for you. Thank you for being Brian's fan." [KBS Radio]