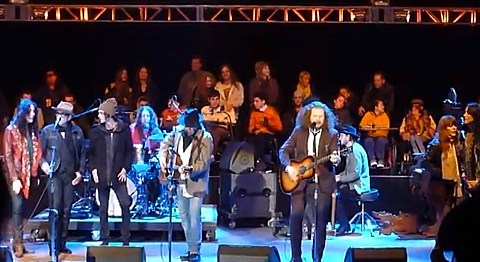 The annual Bridge School Benefit Concert went down over the weekend (10/26 & 10/27) with sets from Crosby, Stills, Nash, and Young, Arcade Fire, Tom Waits, My Morning Jacket, Elvis Costello, Tom Waits and more. On the first day, Neil Young joined Arcade Fire (like he did at the 2011 benefit), this time for a new song that Win said was written in a dream and inspired by Neil, and hence titled, "I Dreamed A Neil Young Song." Neil also joined MMJ for "Harvest Moon." You can check out an 8-hour full-set video of day 1 below (MMJ comes on around 4:50, Arcade Fire around 5:40, QOTSA around 6:40, and CSNY around 7:40).

On the second day, Neil Young, Elvis Costello, MMJ, Jenny Lewis and others performed The Velvet Underground's "Oh! Sweet Nuthin" as a tribute to Lou Reed (who passed away earlier in the day). Tom Waits also performed his first concert in five years, and was joined by Primus' Les Claypool on upright bass. His set, along with the Lou Reed tribute, can be watched below.