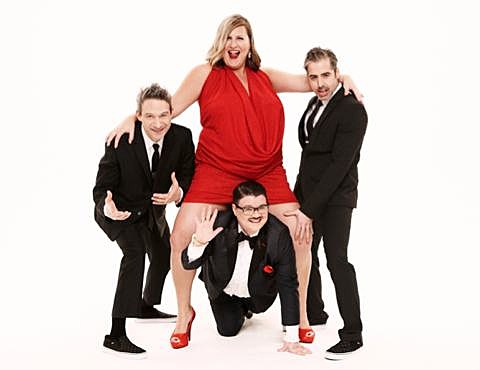 Bridget Everett & the Tender Moments released their debut, Pound It, last year a mix of rock and electrofunk with Everett's none-too-subtle come-ons front and center. She's just made a video for the album's opening track "What I Gotta Do?" which made its debut at her Joe's Pub show earlier this week (1/29) and makes its online premiere in this post.

"What I Gotta Do" is a question that there's more to -- which quickly becomes clear in the NSFW video, directed by 365GUY's Gregory Kramer and Timothy Reukauf. The video costars Everett's Tender Moments bandmates Carmine Covelli (of the Julie Ruin) and Adam "Ad-Rock" Horovitz (who recently starred in a Champagne Jerry video too). Both do a good job as backup dancers. Look for faux Borscht Belt comedian Murray Hill too. You can watch it below.

And catch Bridget Everett & The Tender Moments monthly at Joe's Pub. Their next show is February 25. Tickets are on sale now.

What I Gotta Do from 365GUY.NET on Vimeo.