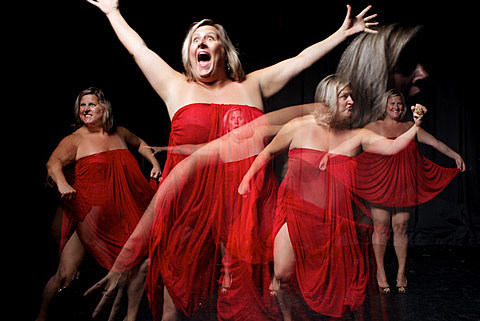 As you may know, Bridget Everett has had a monthly show at Joe's Pub for a while now with her band The Tender Moments (that includes Beastie Boy Adam Horovitz on bass). Many of the songs she's been performing regularly at Joe's Pub, as well as some new ones too, form the basis of Everett's new show, Rock Bottom, which she co-wrote with Marc Shaiman, Scott Wittman and Horovitz. The synopsis:

In Rock Bottom, "early Bette Midler" (NY Times) Bridget Everett barrels through life tip-toeing toward disaster, wine bottle by wine bottle and man by man. Instead of succumbing to her chardonnay-induced stupor, Bridget embraces a series of revelations that lead this voice of an angel to redemption. Rock Bottom is what happens when you're too passionate to give up, and too big to fail.

Rock Bottom, which Horovitz is apart of, will have its first performances at Joe's Pub on October 30 and November 1 & 2. Tickets are on sale now.

In other news, Bridget Everett & the Tender Moments release their new CD, Pound It next week, and will play a release party at Joe's Pub on Tuesday (10/1). Tickets are on sale now. She'll also be a special guest at Patti Lupone's Carnegie Hall show on November 7 (tickets) and she'll be at Fun Fun Fun Fest in Austin too.

Meanwhile, even sooner than all of that, she'll appear at The Bell House on Saturday (9/28) for Kristen Schaal and Kurt Braunohler's Hot Tub show, as part of Eugene Mirman Comedy Festival. That show is sold out.