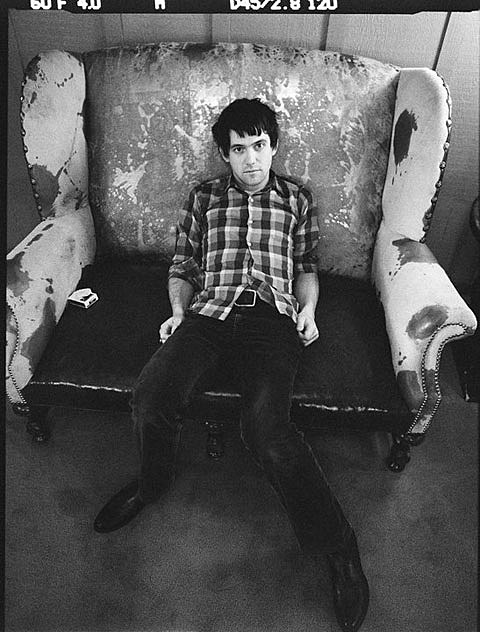 Ben Kweller just toured through NYC, hitting the Rock Shop in Park Slope for two performances on Saturday night (11/27). Those who chose the early show were treated to guest appearances by both Adam Green and John Shade (who has a show coming up with Mountain Man). Those who chose the late show also got Green and Shade, but won with an appearance by Conor Oberst who joined Ben for a rendition of Bright Eyes song "Another Travelin' Song." A video of that is below.

You might remember Bright Eyes as that band/project Conor led before he started calling himself by his actual name. You may remember seeing Ben Kweller and Conor Oberst play together on stage when Ben opened for Conor at Terminal 5 in 2008.

If my calculations are correct, it's been a bit over three years since "Bright Eyes" played NYC. That November 2007 show was at Radio City Music Hall with Thurston Moore and the Felice Brothers, and earlier that year Bright Eyes played seven nights in a row at Town Hall with special guests that included Britt Daniel, Ben Gibbard, and Ben Kweller.

On March 9, 2011 Bright Eyes will return to NYC and to Radio City Music Hall for a sort-of-all Merge Records bill that will include opening sets by Superchunk and Wild Flag (Conor put out a solo album on Merge and Wild Flag are signed to Merge too). Radio City tickets ranging in price from $25-$39.50 will go on general sale Saturday, December 4th, at 10am, but a presale begins somewhere on December 1st at noon for that show, and for Bright Eyes' only other scheduled gig: June 23rd at Royal Albert Hall in London. There's also an AmEx presale for the NYC show starting Wednesday at noon.

The UK and NYC shows will be in support of a brand new Bright Eyes album, that is coming out on Conor's label Saddle Creek on February 15th, 2011. It's called The People's Key...

"Since 2006 the once revolving cast of Bright Eyes players has settled around permanent members Conor Oberst, Mike Mogis and Nathaniel Walcott, with additional musicians joining them in the studio and on tour. Fully realized and bursting with charisma, The People's Key is an assured and accomplished album, artfully arranged and filled with the engaging and mesmeric songwriting for which Oberst is renowned. Recorded in Omaha, Nebraska, at the band's own ARC Studios, The People's Key was produced by Mike Mogis and engineered by Mogis and Andy LeMaster.

The Radio City show is one day before Wild Flag (the Sleater-Kinney band) plays DC.

The Kweller/Oberst video, all dates, and the tracklist below...

--
Full track list for The People's Key:
1 Firewall
2 Shell Games
3 Jejune Stars
4 Approximate Sunlight
5 Haile Selassie
6 A Machine Spiritual (In The People's Key)
7 Triple Spiral
8 Beginner's Mind
9 Ladder Song
10 One For You, One For Me