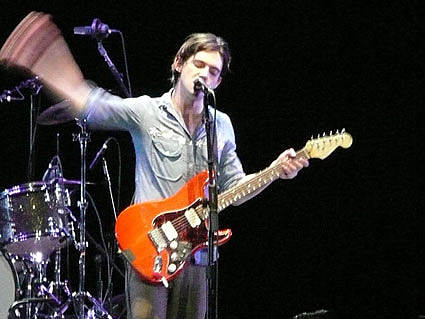 the opening bands were pretty cool. the first band was the felice brothers, and they were sorta country-ish but not annoying and i didn't hate it. the second band was the lifeboats...the something lifeboats....i dunno i'll look it up. they were great;; more instrumental, but great.
and THEN, there was a second intermission after them so we knew that bright eyes would be next, and this intermission was really long so me and erika were like oh yeahhh connor has to finish up his coke or else he wont be able to preform properly!
but when he came on the stage, when he came on with his sky blue button down shirt and picked up his guitar, i was having a seizure.
the most amazing lyrics...oh god DJDSKLLFS!! and he said that they've been touring for 11 years, and that this was their last show. when he said that, me and erika looked at eachother with the widest and BRIGHTEST eyes, like we were the luckiest people on earth.
i really hope that connor was just coked out and he didn't mean that. i need to see them again. <3 [Rachel]