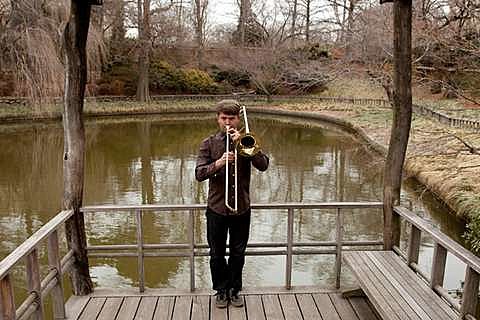 As mentioned, Kelly Pratt will be aiding St. Vincent and David Byrne on their upcoming tour, leading an eight-piece brass ensemble at venues around the country including Beacon Theater and Williamsburg Park. Before that tour, Kelly's project Bright Moments (that also has two other members going out on tour with Annie and David), who records for the Byrne-associated Luaka Bop label, will play a local show in Brooklyn on Wednesday (7/25) at Union Hall with Valley Lodge (whose members include comedian/writer Dave Hill and Walt Mink's John Kimbrough) and Good Field. Tickets for that intimate Park Slope show are on sale now.

If you can't make it to the show, you can also listen to Bright Moments live in studio on NPR's World Cafe on Thursday (7/26) at noon on WFUV. The local broadcast schedule is here.

Meanwhile, you can catch Dave Hill in NYC tonight (7/23) at the Half King doing an appearance for his book, Tasteful Nudes. The show starts at 7 PM.

A video of Bright Moments covering Stevie Wonder's "I Just Called" is below...

I Just Called - Bright Moments from Kelly Pratt on Vimeo.