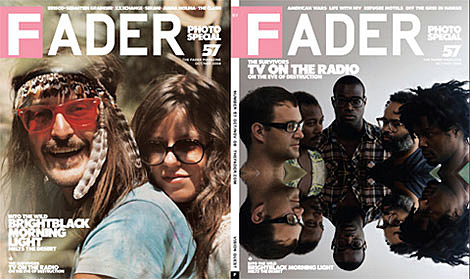 As previously noted, Brightblack Morning Light play Le Poisson Rouge tonight/Monday and then again in NYC on Tuesday at Southpaw. Their new album, Motion To Rejoin, is out now on Matador (2 songs for download above) and you might have seen them on one side of the cover of the new FADER (if not, the picture is right up there too with the same issue's podcast). Cokemachineglow says,

The criticisms leveled against Brightblack Morning Light are so obvious that they seem almost underhanded: yes, Nabob Shineywater and Rachael Hughes create ridiculous myths about themselves; yes, they're obsessed with crystals and rainbows and every new age/hippie cliche out there; yes, they only play one speed and it's really really slow. Every review seems to start with the backstory, mention offhand the band's extraordinary ability to incorporate soul and blues into a gorgeous syrupy drone, then attach a 3/5 or something as if they're obliged as perceptive critics to dock marks due to all the bullshit...

All dates and a video below...