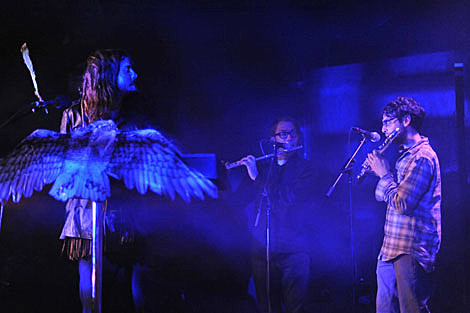 Brightblack Morning Light have a set of Arizona/California dates and two NYC shows planned for May and June. The group plays The Studio at Webster Hall on Wednesday, June 10th (tickets) and Brooklyn's Studio B on Thursday, June 11th. Zomes, the project of Lungfish guitarist Asa Osborne, opens both. No general admission ticket info for the Studio B show yet, but we think it's safe to say that it is part of the Northside Festival (4-day festival passes are still on sale). Stay tuned for more details as we get them.

BBML's latest record, Motion To Rejoin, came out in September 2008 on Matador. The MP3s above are two tracks from that disc. The group most recently visited NYC on January 21st, as part of the Laurie & Friends show at BAM featuring Laurie Anderson, Dirty Projectors and others.

All tour dates, with a pair of videos from the band's fall tour, below...