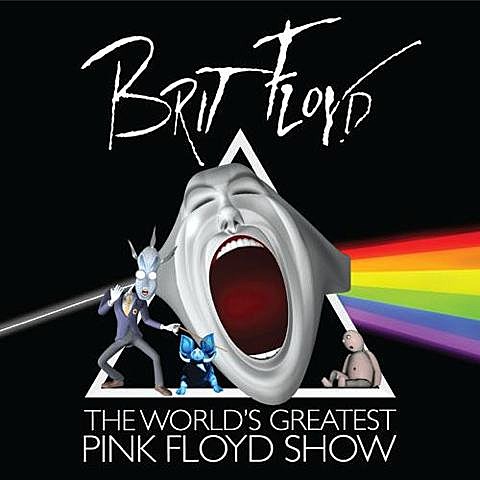 When it comes to hating on the concept of tribute bands making bank playing other peoples' tunes, your man Klaus will always be the first in line to drop the stinkiest, juiciest clanger on the sheer artlessness of that entire racket... with one very big, laser-infused, rear-projection having exception; Brit Floyd. To cover a band's back-catalog with passable precision is one thing. And hey, sometimes a night out with your bros can be drastically enhanced by getting hammered while a band trips its way through a set of covers of classic rock and roll tunes. But for a cover band to deliver its audience the big budget, large scale experience that's so close to the real thing that you have to remind yourself periodically that it's only a cover band? Man, that is a feat. And for me to not only greenlight but to whole-heartedly endorse a cover band? Jack, this is as close to hell freezing over as you're gonna get.

Brit Floyd is an arena filling Pink Floyd cover band who has honed the craft of mimicking Pink Floyd on every possible level so well that, as far as most Pink Floyd fans are concerned, Brit Floyd is just about full-on carrying the torch for Pink Floyd as they get older, deader, and absent from the musical world. Musically, they have it all; a phenomenal band who can technically produce to the minutest detail the music of Pink Floyd even down to the incredible female back-up singers and a sax player who is audibly indistinguishable from Dick Parry or Scott Page. They have a production crew that brings projections, lasers, and fancy lights, all of which are nearly as good as, though smaller in scale, to what Pink Floyd brought on the road with them for tours supporting Momentary Lapse of Reason or The Division Bell. I saw them in Liverpool a few years back. I was there for work and my hotel was directly across the street from the Echo Arena. I had nothing better to do and had heard they were 'pretty good,' so I figured, eh, why the hell not? It was one of the most incredible concert experiences of my life, and I had to keep reminding myself "It's only a cover band. It's only a cover band."

The Brit Floyd are coming back to the States for a massive 2014 tour called Discovery World Tour 2014:

Named after Pink Floyd's recent box set of the same name, and featuring music from the Syd Barrett led '60s psychedelic pop of 'The Piper at the Gates of Dawn', through to the nineties 'The Division Bell', and everything in between, the brand new DISCOVERY show will capture in note-for-note detail, all your favourite moments as well as a few lesser known gems, from one of the most outstanding and enduring back catalogues in the history of recorded music. Includes stunning new video animation, theatrics and inflatables.

The tour includes four local dates, one of which is at the Beacon Theater on April 2. They'll also be at the Oakdale in Connecticut on March 29, The State Theater in New Brunswick, New Jersey on April 1, and at the Mid Hudson Civic Center in Poughkeepsie on April 5. Tickets for all those shows are on sale now. All tour dates are listed, along with a few Brit Floyd videos, below.