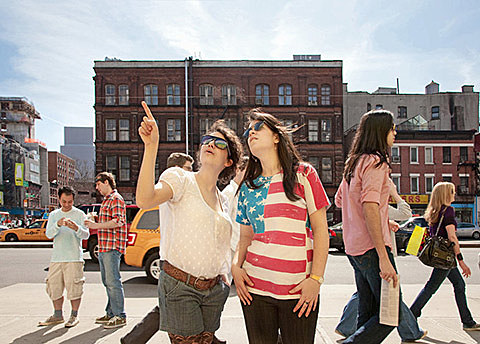 Unless you've been living under a rock that doesn't have a great grasp of pop culture, you've probably heard of Broad City, the fantastic webseries-cum-TV hit that is wrapping up its first season on Comedy Central this year. The stars of the show, Ilana Glazer and Abbi Jacobson, are veterans of the New York comedy scene and truly incorporate the city as a "character" without resorting to the same hackneyed New York stereotypes. In one episode, for instance, Abbi's date abandons her out of a very real fear of the disgusting Penn Station (watch a clip of that below).

If you want to experience Broad City in person, you're in luck -- the cast is playing shows all over NYC in the next few months! First, cast member Phoebe Robinson is performing in a benefit for comedian Liza Dye, who was recently injured when she fell onto subway tracks. The show is at Littlefield on March 27 and also features Ali Wong (@midnight), Jermaine Fowler (Guy Code), Murderfist, Michelle Wolf (Late Night with Seth Meyers), Sue Smith (Best Week Ever), Aparna Nancherla (Conan), & hosts Charla Lauriston and Justin Perez. Tickets are on sale now.

In addition, Abbi and Ilana are performing at UCB Chelsea on April 2 for their monthly "Broad City Live" show. Tickets are sold out, but try to get in off the stand-by line -- it's worth it! Info HERE.

Finally, Abbi and Ilana are touring nationally to support their new show. Although the tour was initially postponed so they could write the second season of Broad City, it's been rescheduled for the fall, and they're playing The Bell House on December 13. The show is also unfortunately sold out, but if you're really itching to see the duo, catch them at another date on their month-long tour. Find all tour dates below..