Brokeback in 2013 (photo by Jim Newberry) 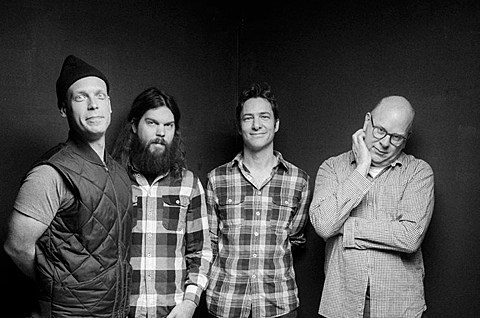 Long-running Chicago post-rock band Brokeback (led by Douglas McCombs of Tortoise and Eleventh Dream Day) are on tour now with Come/Codeine guitarist Chris Brokaw (who's opening for them and playing in the band). That tour comes to NYC on Friday (4/17) at Trans-Pecos also with Holy Sons, the project of Emil Amos (Om, Grails), who played NYC earlier this week too. Tickets for Friday's show are on sale now. All dates are listed below.

Doug McCombs and Chris Brokaw also collaborated in the band Pullman, who released Turnstyles and Junkpiles in 1998 and Viewfinder in 2001. Those albums have been out of print for over a decade, but Thrill Jockey is reissuing them on Saturday (4/18) for Record Store Day.

Stream a Pullman song, with Holy Sons' cover of Black Flag's "Breakdown On the Beach," and the list of Brokeback dates, below...