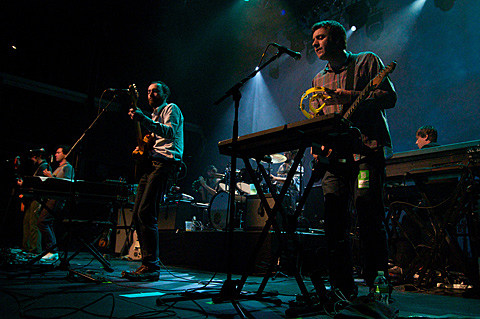 Broken Bells who recently lauched a 3D interactive video for "October", kick off a string of dates tonight (12/1) at Irving Plaza. The NYC show is part of the 101.9 RXP "Yule Rock Holiday Concert Series". The band will hit select cities from coast-to-coast, eventually landing in LA by the middle of the month. Updated tour dates are below.

And Broken Bells member Danger Mouse just wouldn't be himself if he didn't have his hand in another 10000 projects. His latest is "Danger Mouse & Daniele Luppi present: ROME":

Brian Burton [Danger Mouse] and Daniele Luppi met in Los Angeles in 2004... Luppi, a composer from Italy, was receiving acclaim for his album An Italian Story, which revisited the cinematic sounds of his childhood. (He has also written music for the screen - Sex and the City, Nine - and later worked with Burton on arrangements for Gnarls Barkley, Dark Night of the Soul and Broken Bells.)

United by their shared passion for classic Italian film music, ...[and] after an intense songwriting period - writing separately at first, and then together as the songs evolved - they travelled to Rome in October 2006. Luppi made some calls and they assembled the original musicians from films such as The Good, the Bad and the Ugly and Once Upon a Time in the West - including the legendary Marc 4 backing band and Alessandro Alessandroni's 'I Cantori Moderni' choir. Most of the musicians were in their seventies and hadn't worked together for several decades.

They booked time in Rome's cavernous Forum Studios - formerly Ortophonic Studios, founded, amongst others, by the great Ennio Morricone... Every effort was made to replicate the recording practices of the 1960s/70s golden age, recording live and straight to tape, with overdubs but no electronics, computers, 21st-century effects or studio trickery.

In addition, Jack White and Norah Jones each lend their voices to three tracks on the forthcoming LP, due in March 2011 via Capitol Records.

In other Jack White news, the White Stripes frontman/Third Man Records honcho is taking some fire for deciding to put up some limited edition Third Man material up for auction on ebay:

Paid subscribers of Third Man Records' The Vault were directed to an eBay page with open auctions for copies of the limited edition vinyl version of the self-titled White Stripes reissue. Within an hour, all 5 auctions were above $100 each, and a small shitstorm of comments began to erupt on The Vault, when, suddenly, Jack White joined the site's chatroom with a handbasket-gripping introduction of "See you in hell?" and explained, quite simply, why the hell there were people paying 500 bucks for a record you have to crack open to listen to: "Supply & demand.... nobody told them to buy it with a gun to their head."

...When a fan tried to argue that people with "more money than sense" were to blame, Jack retorted: "Or are they just paying what the going rate is?" White explained: "We sell a Wanda Jackson split record for 10 bucks, the eBay flipper turns around and sells it for 300. If 300 is what it's worth, then why doesn't Third Man Records sell it for 300? If we sell them for more, the artist gets more, the flipper gets nothing. We're not in the business of making flippers a living. We're in the business of giving fans what they want." - [Antiquiet]

Reggie Watts auction coming soon? And the attack on the eBay record microeconomy is on. All Broken Bells dates and a video is below.

--
Broken Bells - The Ghost Inside