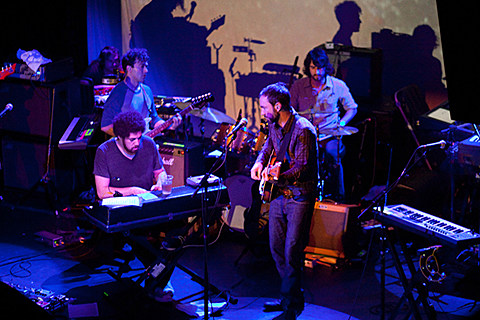 "Broken Bells say they are to take their time before recording their second album, in order to work on "different things".

"I think we are going to do different things before we do another [Broken Bells album]," Danger Mouse explained. "We spent the last two years mostly with just Broken Bells stuff, so it would be great to have other things to do for a while."

With [James] Mercer nodding in agreement, Danger Mouse reaffirmed that the duo will "definitely" return in the future.

"We've already started out some new songs that we really like for the new album, but the schedule's gonna take a little while before it comes out." [NME, June 28]

Apparently that break doesn't include live shows, because after a string of European festivals in August, Broken Bells has only a month off before playing Austin City Limits on October 8th and a New York show at Terminal 5 on Monday, October 11th. Tickets go on AmEx presale Wednesday at 11am; general sale starts Friday at noon.

The band's Christina Hendricks-starring video for "The Ghost Inside" is below...