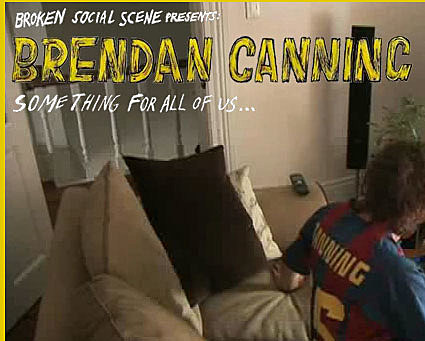 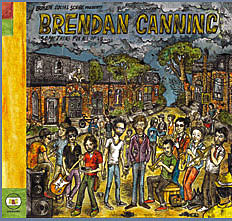 BROKEN SOCIAL SCENE PRESENTS:
BRENDAN CANNING - SOMETHING FOR ALL OF US...
(Arts + Crafts; July 22nd)

This summer, we're thrilled to present you with the next installment of the Broken Social Scene Presents series- an incredible album by half of BSS' core duo, Brendan Canning, entitled Something For All of Us... Written and recorded over the last year and a half, Something for All of Us... is a very different album to the series' first release, last fall's Kevin Drew's Spirit If.... Something For All of Us... is a dream-fragment-filled, euphoria-inducing, shimmering piece of musical goodness, and contains songs that will undoubtedly become Broken Social Scene favorites within their vast catalogue.

But let's not get ahead of ourselves. Let's start with how this record came to be. In January 2007, Brendan Canning started to amass the songs he had written over time into a coherent, album-like shape, recording in between score work/music contribution for feature films (including Half Nelson, the upcoming Time Traveler's Wife and others), DJ gigs, soccer practice and more. The fact that he was singing his own songs is interesting to note, since Canning, although a vital creative force within Social Scene, had only previously acted as the frontman on three songs in the band's repertoire - "Stars and Sons" on You Forgot It In People, "Handjobs for the Holidays" on Broken Social Scene, and a b-side called "Market Fresh." One listen to Something For All of Us... shows how naturally this role fits Canning; his honeyed voice suits numerous styles and instrumentation, and his melodies are unfaltering in their excellence. Where collaborator Kevin Drew pushed the boundaries of his aural imagination with colorful explosions of sound on Spirit If..., Canning molds his tones into flickering, smoldering, sugared songs, driven by propulsive drums, bass-heavy choruses and fuzzy, space-tinged guitars. And did we mention he invited some friends to come by and play on the album as well?

Recorded and produced in Toronto by Canning along with Ryan Kondrat and John La Magna, guest appearances by Stars' Amy Milan, Metric's James Shaw, Jason Collett, Land of Talk's Liz Powell, and fellow Broken Social Scene mates Kevin Drew, Justin Peroff, Andrew Whiteman, Ohad Benchetrit and more, Something For All of Us... ultimately reveals the many facets of Canning's personality, as well as his record collection. Its eleven tracks are informed equally by his time spent in love with early 90's indie heroes Sonic Youth and Dinosaur Jr. (see: "Hit the Wall"), or as an active Toronto disco/house DJ (the spiky cowbell of "Love is New"), or as a bedroom electronic producer (the glitch-tronic instrumental "All the Best Wooden Toys Come From Germany") or as a guy who can just write a fantastic song that doesn't require bells and whistles (the soft winter haze of "Snowballs & Icicles"). Insta-anthem "Churches Under the Stairs" is simply classic Broken Social Scene, while "Antique Bull" balances on the vocal duet of Canning and Broken Social Scene/Apostle of Hustle collaborator Lisa Lobsinger, whose voices blend seamlessly against stark piano chords and shuffling acoustic guitars. "Take Care, Look Up," layers keyboard hums with Brendan's melancholic delivery and a bed of electric guitar strums, quietly ending the record.

Songs from Something For All of Us... will be included during Broken Social Scene's live show. As of now, the band will be playing select shows throughout the summer, including special stops at this year's Bonnaroo Festival, Lollapalooza and Outside Lands Festival.