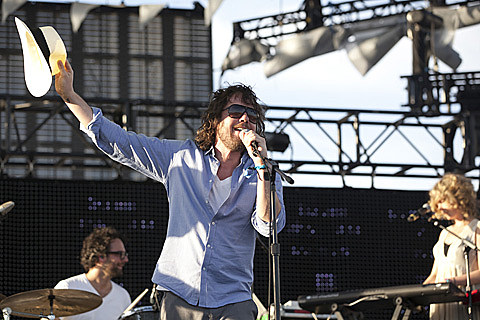 Broken Social Scene have a few live dates scheduled this summer, and it's just been revealed to us that one of those shows will be at Williamsburg Waterfront in Brooklyn on Thursday, September 8th. That is in fact the same date TV On the Radio is playing the outdoor venue. BSS are opening the show. Tickets go on sale Friday at noon.

Broken Social Scene were also announced on the lineup of Austin City Limits early this morning, and they'll also be making an appearance at Bumbershoot in Seattle on September 4th. The latter hasn't actually announced its full lineup yet, but so far they've also revealed:

The full lineup is coming in June. Stay tuned. And speaking of Toro Y Moi, he just announced a big NYC show that goes on sale Friday too. Speaking of Urge Overkill, they play NYC TONIGHT (5/17).

All BSS dates below...