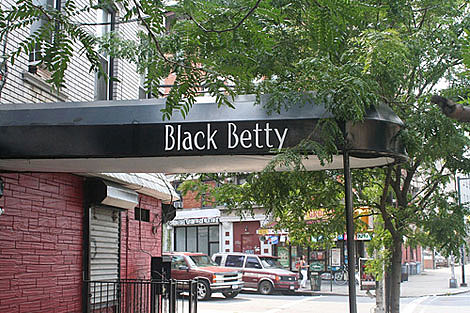 The sad news came a month after the owners posted a message to MySpace stating that they needed money, but that "Black Betty is not closed, nor closing. We have signed a new 10 year lease..." According to the new statement (which you can read in full below), the lease "was renewed for 10 years at the end of April 2009, however the lease was also offered to other perspective candidates under more lucrative terms..." Long story short, it is closing.

Lots of changes on that block. Black Betty is right across the street from the in-development Knitting Factory Brooklyn (ex-Luna Lounge) (which we still don't have an official update on, though all signs and rumors point to the place re-opening some time this summer, possibly as a seated venue).

Say goodbye to Black Betty by having a drink and/or seeing a show there one more time (or for your first time). Options include The Phenomenal Handclap Band, who played Southpaw last night, and who are playing there tonight (May 13). Full schedule, including Antibalas, and full goodbye note, below... 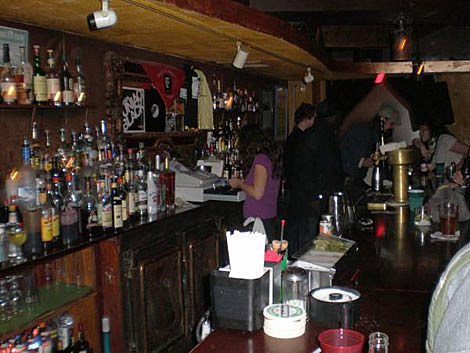 According to Schmeling and Glover, the Metropolitan Avenue in Brooklyn, NY lease was renewed for 10 years at the end of April 2009, however the lease was also offered to other perspective candidates under more lucrative terms. At the end of the battle, Schmeling and Glover conceded and agreed to close by mid June. "We are saddened and heart-broken that this is the end of the Black Betty era," said Glover. "But at this time we're focusing on what a fantastic place Betty means to Brooklyn bands, DJs and of course all of our amazing patrons and friends" she added.

"We're working really hard to make the next couple of months loaded with great music and entertainment," says Schmeling. "May 7th will mark a true celebration of 10 years dedicated to Williamsburg with a tribute to our House DJs and honestly, the outreach from the community has really been incredible."

Local bands, DJs and performers are lining up to fill the remaining nightly slots, with Rev. Vince Anderson and His Love Choir scheduled to perform the last night, Monday June 15th. The kitchen and bar, offering North African and Mediterranean dishes and extended happy hours, will be in full swing until close. Demand for Black Betty t-shirts have been pouring in and will be available for sale at the 10th Anniversary Party on May 7th.

ABOUT BLACK BETTY/ Since its spring opening in 1999, Black Betty has gained a reputation as a "pioneer" and "Superman of Williamsburg nightlife." Founders Bud Schmeling and Sandy Glover compiled their world travel experiences to transform the once gangster clad Highway Lounge into a hipster sanctuary and Moroccan delight, fondly referred to as "Trashablanca." A true urban oasis, Black Betty beckons Williamsburg locals and tourists alike who crave an array of delectable Mid-Eastern eats, and an eclectic mix of live performers. Nightly live music and DJ spin masters serve up everything from Brazilian rock to soul funk, playing second only to the eclectic Mediterranean/ North African fare.

"Rev. Vince Anderson and his Love Choir" Mon. May 25th Dirty gospel? You bet, when Rev. Vince's in charge! With solo musical appearances from the Roots and TV On The Radio, Rev. Vince delivers the best music in Brooklyn every Monday night. 10:30p.m. No cover. www.reverendvince.com

These performers and more, all leading to our final evening MONDAY, JUNE 15, 2009 with Rev. Vince Anderson & His Love Choir