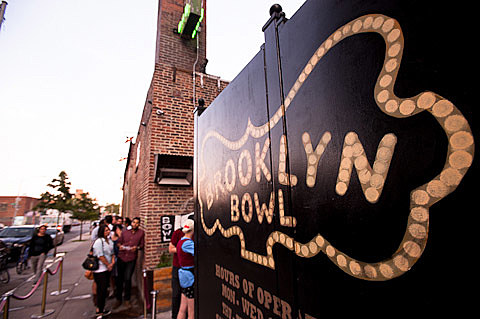 There has been talk of new Brooklyn Bowls opening for a while, including a Chicago one that still hasn't materialized, but now comes word that...

"Brooklyn Bowl, one of the city's most popular music nightspots, is expanding to two other cities, establishing clubs in London and Las Vegas, the owners said.

The partners behind the nightclub in Brooklyn -- a bowling alley on Wythe Avenue that features food and live music -- say they have signed deals to lease large spaces adjacent to the O2 Arena in London and at the base of a giant Ferris wheel in a new outdoor mall in Las Vegas." [NY Times]

More info at the NY Times, but both new clubs will be like the one in Brooklyn which means concerts and bowling under the same roof.

Bowery Presents meanwhile just opened their second club in Philadelphia after opening one recently too in New Orleans.